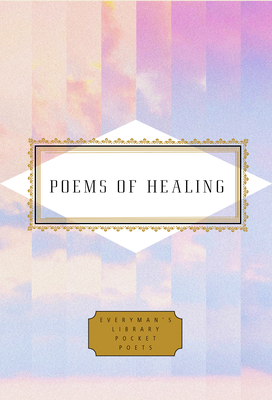 
Available at One of Our Locations
A remarkable Pocket Poets anthology of poems from around the world and across the centuries about illness and healing, both physical and spiritual.

From ancient Greece and Rome up to the present moment, poets have responded with sensitivity and insight to the troubles of the human body and mind. Poems of Healing gathers a treasury of such poems, tracing the many possible journeys of physical and spiritual illness, injury, and recovery, from John Donne’s “Hymne to God My God, In My Sicknesse” and Emily Dickinson’s “The Soul has Bandaged moments” to Eavan Boland’s “Anorexic,” from W.H. Auden’s “Miss Gee” to Lucille Clifton’s “Cancer,” and from D.H. Lawrence’s “The Ship of Death” to Rafael Campo’s “Antidote” and Seamus Heaney’s “Miracle.” Here are poems from around the world, by Sappho, Milton, Baudelaire, Longfellow, Cavafy, and Omar Khayyam; by Stevens, Lowell, and Plath; by Zbigniew Herbert, Louise Bogan, Yehuda Amichai, Mark Strand, and Natalia Toledo. Messages of hope in the midst of pain—in such moving poems as Adam Zagajewski’s “Try to Praise the Mutilated World,” George Herbert’s “The Flower,” Wisława Szymborska’s “The End and the Beginning,” Gwendolyn Brooks’ “when you have forgotten Sunday: the love story” and Stevie Smith’s “Away, Melancholy”—make this the perfect gift to accompany anyone on a journey of healing.

Everyman's Library pursues the highest production standards, printing on acid-free cream-colored paper, with full-cloth cases with two-color foil stamping, decorative endpapers, silk ribbon markers, European-style half-round spines, and a full-color illustrated jacket.
KARL KIRCHWEY is an award-winning American poet, book reviewer, creative writing teacher, translator, arts administrator, and literary curator. He has been a director of the Unterberg Poetry Center of the 92nd Street Y, directed the creative writing program at Bryn Mawr College, served as Andrew Heiskell Arts Director at the American Academy in Rome, and is currently a professor and director of the MFA program in creative writing at Boston University.