The Personality Brokers: The Strange History of Myers-Briggs and the Birth of Personality Testing (Paperback) 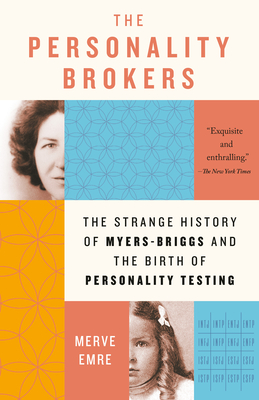 The Personality Brokers: The Strange History of Myers-Briggs and the Birth of Personality Testing (Paperback)


Available at One of Our Locations
An unprecedented history of the personality test conceived a century ago by a mother and her daughter—fiction writers with no formal training in psychology—and how it insinuated itself into our boardrooms, classrooms, and beyond. The basis for the HBO Max documentary, Persona

The Myers-Briggs Type Indicator is the most popular personality test in the world. It is used regularly by Fortune 500 companies, universities, hospitals, churches, and the military. Its language of personality types—extraversion and introversion, sensing and intuiting, thinking and feeling, judging and perceiving—has inspired television shows, online dating platforms, and Buzzfeed quizzes. Yet despite the test's widespread adoption, experts in the field of psychometric testing, a $2 billion industry, have struggled to validate its results—no less account for its success. How did Myers-Briggs, a homegrown multiple choice questionnaire, infiltrate our workplaces, our relationships, our Internet, our lives?

First conceived in the 1920s by the mother-daughter team of Katherine Briggs and Isabel Briggs Myers, a pair of devoted homemakers, novelists, and amateur psychoanalysts, Myers-Briggs was designed to bring the gospel of Carl Jung to the masses. But it would take on a life entirely its own, reaching from the smoke-filled boardrooms of mid-century New York to Berkeley, California, where it was administered to some of the twentieth century's greatest creative minds. It would travel across the world to London, Zurich, Cape Town, Melbourne, and Tokyo, until it could be found just as easily in elementary schools, nunneries, and wellness retreats as in shadowy political consultancies and on social networks.

Drawing from original reporting and never-before-published documents, The Personality Brokers takes a critical look at the personality indicator that became a cultural icon. Along the way it examines nothing less than the definition of the self—our attempts to grasp, categorize, and quantify our personalities. Surprising and absorbing, the book, like the test at its heart, considers the timeless question: What makes you, you?
MERVE EMRE is an associate professor of English at the University of Oxford. She is the author of Paraliterary: The Making of Bad Readers in Postwar America. Her work has appeared or is forthcoming in The New Yorker, Harper's Magazine, Bookforum, The New York Times Magazine, The Atlantic, The New Republic, The Baffler, n+1, and the Los Angeles Review of Books, where she is senior humanities editor.
A Best Book of the Year: The New York Times Critics • The Economist • The Spectator • Mental Floss

"In this riveting, far-reaching book [Emre] brings the skills of a detective, cultural critic, historian, scientist and biographer to bear on the MBTI and the two women who invented and promoted it.... She is never condescending to or dismissive of the people who find their four-dimensional profiles illuminating and helpful. That is why, when Ms. Emre describes her book as being 'for the skeptics, the true believers, and everyone in between,' she is absolutely right."
—Wall Street Journal

“Merve Emre’s new book begins like a true-crime thriller, with the tantalizing suggestion that a number of unsettling revelations are in store.... It takes a while to realize that Emre has gotten you hooked under arguably false pretenses, but what she finally pulls off is so inventive and beguiling you can hardly begrudge her for it. The revelations she uncovers are less scandalous than they are affecting and occasionally (and delightfully) bizarre.... The Personality Brokers is history that reads like biography that reads like a novel—a fluid narrative that defies expectations and plays against type.”
—New York Times

“[A] brilliant cultural history of the personality-assessment industry.”
—The Economist

“A unique meld of a hidden history of two admirably prickly women and an examination of why their ideas were simultaneously damaging and popular.”
—The Ringer

“The Personality Brokers goes into the flawed, fraught history behind the Myers-Briggs Type Indication, which is about as psychologically credible as a Buzzfeed quiz.... Emre is careful to be generous to those who fit into this category [who believe in the MBTI], writing at the end of the book about the enthusiasts she encountered along the way.”
—The Outline

“Crackling.... The pleasure of Emre’s book...is not vague grandiosity but specificity. Whatever her reservations about Katharine [Briggs] and Isabel [Myers]’s work, her commitment to her subjects is total—she renders personality in all its detail and contradiction.”
—Bookforum

“A gripping mix of history and opinion relevant to anyone who has ever taken—or thought about taking—the Myers-Briggs Type Indicator.”
—Forbes.com

“Emre’s account of the emergence and appeal of the MBTI is nuanced and non-judgmental…[her] careful investigations of the tool’s bizarre origins and alarming impact weave a compelling narrative.”
—Nature

"An archivally rich mix of history, biography, and a bit of reporting.... [A] close, sympathetic study of the test's creators and their aspirations."
—New York Review of Books

“A fascinating and necessary exposé of personality testing and why people are so eager to find their type.”
—Real Simple

“Revealing that backstory is where Emre’s book shines.... The details unfold novel-like from one chapter to the next....Emre takes readers along for the wild ride as the Myers-Briggs evolves from infancy to youth to maturity.”
—Christianity Today (4 stars out of 5)

“Superb and deeply thoughtful… a thrilling biography of Katherine and Isabel as well as a broad analysis of our modern mania for defining the human self…a tremendous piece of storytelling and an acute analysis of the craving of the contemporary, secular imagination for certainties.”
—Sunday Times (UK)

“Merve Emre... is a masterful and nuanced storyteller. [The Personality Brokers] is a riveting biography of Katharine Briggs and Isabel Myers and their controversial, influential test.”
—New Statesman (UK)

“The story behind the Myers-Briggs tests proves an interesting one, and is told with considerable relish, vim and some savage comedy by Emre.... [R]ichly entertaining.... A very funny book.”
—The Spectator (UK)

“This is a sparkling biography—not just of a pair of remarkable women, but of a popular personality tool.  Merve Emre deftly exposes the hidden origins of the MBTI and the seductive appeal and fatal flaws of personality types.  Ultimately, she reveals that a sense of self is less something we discover, and more something we create and revise.”
—Adam Grant, New York Times bestselling author of Give and Take, Originals, and Option B with Sheryl Sandberg

“Genius, passion, insight, love, heartbreak, war, family, competition, corporate villainy: the story of the Myers-Briggs personality assessment, and the extraordinary mother-daughter duo who conceived and developed it, has all the stuff of a great novel, with the added advantage that it’s true. Chances are you didn't know that Myers and Briggs were women. In the tradition of Hidden Figures, this brilliant book proves—yet again—that women were behind some of the most important scientific innovations of wartime and postwar America. I absolutely love it.”
—Liza Mundy, New York Times bestselling author of Code Girls

“Merve Emre pulls back the curtain on the world of personality testing and the mother-daughter duo whose work catapulted the field into a movement. The Personality Brokers is a fluid mix of history, research, and first hand reporting that speaks to both true believers and skeptics alike. With her engaging and persuasive narrative, Emre elucidates how personality testing became a cultural force, one whose influence persists.”
—Nathalia Holt, New York Times bestselling author of Rise of the Rocket Girls

“[A] fascinating survey…Emre delves deeply into these women’s personalities and those of the many others who spread their ideas far and wide over the course of nearly a century.”
—BookPage

“An illuminating dual biography…Emre has dug deeply into published and archival sources to produce a deft, gracefully written account of Katherine Briggs and her daughter Isabel Myers.... A discerning history of the quest for self-knowledge.”
—Kirkus Reviews

“[Emre] tells the fascinating story of the origins of the world’s most widely used personality test.... She is excellent at recounting how the MBTI began to sweep American institutions in the 1950s. [A] fine study.”
—Publishers Weekly

“This combined dual biography and social history seeks explanations for why an admittedly flawed, unscientifically proven personality test—created in the 1920s by a mother-daughter team of two untrained pseudointellectuals—continues to be the most revered personality indicator in existence...[T]his eye-opening account gives readers insight into how one evaluation method morphed into a neat, satisfying packaging system for our complicated psyches."
—Booklist