Harlow & Indiana (and Reese): A True Story about Best Friends...and Siblings Too! (Hardcover) 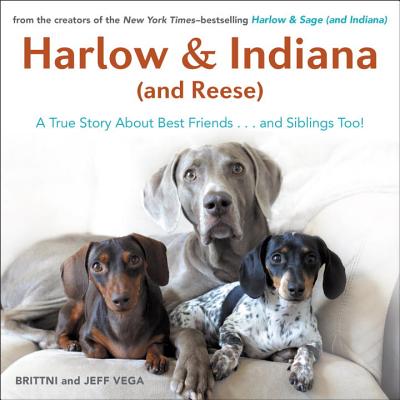 Harlow & Indiana (and Reese): A True Story about Best Friends...and Siblings Too! (Hardcover)


Currently Unavailable
New York Times bestselling canines Harlow and Indiana, dubbed the most adorable best friends in the world by Buzzfeed, are back with a new addition to the family: Reese Lightning
In the beginning, Indiana Thunderbolt learned the ropes from her big sister, Harlow. She had no idea how things worked in her new family, but like any good older sibling, Harlow explained how they celebrated holidays, took family vacations, and remembered their sister, Sage who had gone on to doggie heaven before Indiana was born. Over time, Indi started to get the hang of it all, and she found herself growing up. In Harlow & Indiana (and Reese), it's Indi's turn to be a big sister when baby Reese arrives. Reese is tinier than Harlow and Indiana could ever have imagined, and they have a lot to get used to with a new sibling in the house.
Narrated by the sassy and rabble-rousing Indiana, Harlow & Indiana (and Reese) is as adorable and charming as Harlow & Sage, filled with more jokes, more adventures, and even more sibling love than before. Richly illustrated with entirely new images of the highly photogenic pups, Harlow & Indiana (and Reese) is a new story about the furry friends that have captured hearts across the globe.
Brittni and Jeff Vegaare the creators of the New York Times bestselling book Harlow & Sage (and Indiana). Theylive in Salt Lake City and enjoy photographing their furry friends and making people laugh. Every moment of their free time is spent with their three best friends, Harlow, Indiana, and Reese."