Duke Sucks: A Completely Even-handed, Unbiased Investigation into the Most Evil Team on Planet Earth (Paperback) 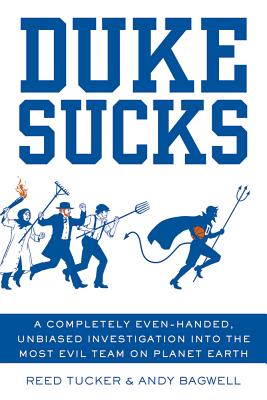 Duke Sucks: A Completely Even-handed, Unbiased Investigation into the Most Evil Team on Planet Earth (Paperback)

In the ranks of NCAA college basketball, Duke University is like something scraped off the bottom of a shoe. It's like a nasty virus you catch from a door handle at a public toilet.

No team in sports is as uniquely hated as those smug, entitled, floor-slapping, fist-pumping, insufferable Blue Devils. The loathing has almost reached the level of a religion. Christian Laettner is a punk. Amen. The Cameron Crazies are obnoxious. The Plumlees are worthless times three. Coach K is a jerk. Kumbaya.

The team is dogged by an intense hatred that no other team can match—and for good reason. Millions of hoops fans and March Madness aficionados around the world are not imagining things. Duke really is evil, and within the pages of Duke Sucks, Reed Tucker and Andy Bagwell show readers exactly why Duke deserves to be so detested. They bruise and batter the Blue Devils with fact after fact, story after story, statistic after statistic. They build an airtight case that could stand up in a court of law.

So sit back in your "I Hate Duke" t-shirt, and in true Duke fashion, force someone poorer than you to do your work as you crack open the ultimate guide to Duke suckitude.

Reed Tucker is a staff features writer at the New York Post. He lives in Brooklyn, New York. He is co-author of Duke Sucks: A Completely Evenhanded, Unbiased Investigation into the Most Evil Team on Planet Earth.

Andy Bagwell is a former member of Selected Hilarity, one of the top college comedy acts in the nation. He lives in Cary, North Carolina. With Reed Tucker he is the co-author of Duke Sucks, and the two host the “Tar Heel Bred, Tar Heel Dead” podcast, an obsessive, occasionally humorous look at UNC basketball.
“It's daylight savings time, which means it's also Duke-hating time.” —The Denver Post