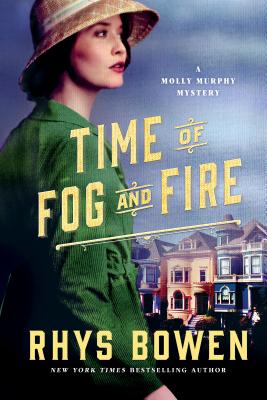 This is book number 16 in the Molly Murphy Mysteries series.

Embarking on a cross-country journey with her young son, Molly can’t fathom what’s in store for her, but she knows it might be dangerous—in fact, it might put all of their lives at risk, in Rhys Bowen's Time of Fog and Fire.

Molly Murphy Sullivan's husband Daniel, a police captain in turn-of-the-century New York City, is in a precarious position. The new police commissioner wants him off the force altogether. So when Daniel’s offered an assignment from John Wilkie, head of the secret service, he’s eager to accept.

Molly can’t draw any details of the assignment out of him, even where he’ll be working. But when she spots him in San Francisco during a movie news segment, she starts to wonder if he’s in even more danger than she had first believed. And then she receives a strange and cryptic letter from him, leading her to conclude that he wants her to join him in San Francisco. Molly knows that if Daniel’s turning to her rather than John Wilkie or his contacts in the police force, something must have gone terribly wrong. What can she do for him that the police can’t? Especially when she doesn’t even know what his assignment is?