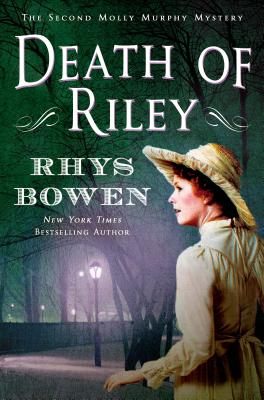 This is book number 2 in the Molly Murphy Mysteries series.

Molly Murphy has finally begun to forget the unpleasant murder of a would-be rapist back in Ireland, not to mention her investigation into the murder of a fellow recent Irish immigrant, and is finally free to begin her life in New York City. Given her experiences so far in the New World, Molly has decided that her first order of business is to become a private investigator, a people finder of sorts, working for families in Europe who've lost touch with relatives in America. Not only might this put some food on her table, but her second order of business is to hook the handsome NYPD police captain Daniel Sullivan, and she envisions lots of opportunities to "seek his counsel" in her new profession.

Paddy Riley is a tough old Cockney P.I. who specializes in divorce work, and with a little persuasion he's ready to take on Molly as an apprentice. It's not exactly what she imagined, but she plans to make the most of it. That is, until she comes in to work one day to find her new world turned upside down and all expectations for her professional life suddenly up in the air.

Before long, Molly has set off on a journey that will take her through the back alleys of Manhattan and into the bars and lounges of the literary scene, where she spends time with writers, actors, poets, and musicians. It's quite an eye-opening turn for innocent young Molly, but she's resolute in her decision to find out exactly what happened that day in the office of Paddy Riley. Armed with nothing more than her fiery will and matching wild red hair, Molly has no idea of the danger her pursuit may bring...