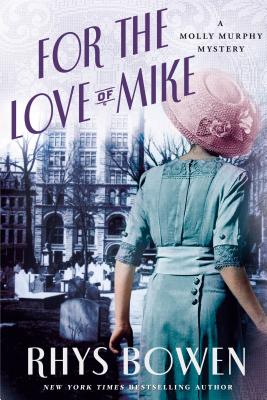 This is book number 3 in the Molly Murphy Mysteries series.

Full of the rich detail of New York's teeming immigrant community and the colorful historical personalities of the age, For the Love of Mike is the triumphant third installment in Rhys Bowen's New York Times bestselling series, now in trade paperback.

Molly Murphy is starting to think the cards are stacked against her. She's determined to be a private detective, but hampering her investigations is the fact that she's finding many places in turn-of-the-century New York City where women are not welcome, something that's as frustrating to her fiery Irish pride as it is to her rapidly emptying pocketbook.

Then two business opportunities pop up simultaneously. An aristocratic family in Dublin fears their daughter has fled to the New World with her unsavory boyfriend, and they hire Molly to track the two down and send the young woman back home. Before she has time to consider her good luck, she's asked to go undercover as a piece worker in the garment business and investigate a potential case of industrial espionage. Now if she can only solve both cases without the help of Daniel Sullivan, the police captain who claims he loves her but who is engaged to someone else...