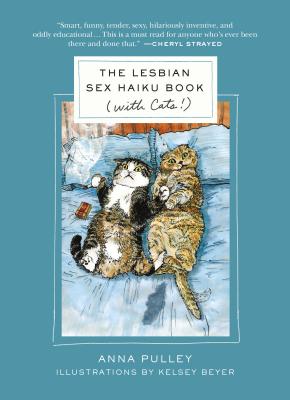 Lesbian sex has been confounding people since the dawn of time. What is it that two women do together exactly? The Lesbian Sex Haiku Book (with Cats!) is a humorous guide to lesbian sex, dating rituals, and relationships, and aims to dispel all myths. Haiku paired with hilarious watercolor illustrations of cats in various stages of sexual awkwardness will enlighten, demystify, remystify, and most importantly entertain as you learn about all the aspects involved in girl-on-girl action.

To icebreaker haiku for first dates:

It has been MANY
years, but I'm not done griping
about The L Word.

To, of course, the mechanics of lesbian sex:

It's like straight sex but
afterwards we ask ourselves,
"We just had sex, right?"

Lesbian sex is
like water polo—no one
really knows the rules.

This laugh-out-loud book is the perfect gift to amuse and educate your friends, loved ones, and lovers.

ANNA PULLEY is the managing editor of the East Bay Express an alt-weekly in Oakland, CA and is formerly the arts and culture editor at San Francisco's SF Weekly. She's been a repeat guest on Dan Savage's podcastSavage Love and is a sex and relationship columnist for The Chicago Tribune.

KELSEY BEYER is an artist living in Oakland. She specializes in printmaking, drawings, illustrations, and figure modeling. Her work has been featured in Foulmouth Greeting Cards, in sex stores, and on Facebook team logos.

"Smart, funny, tender, sexy, hilariously inventive, and oddly educational...This is a must-read for anyone who's ever been there and done that." —Cheryl Strayed

"Sharp, stereotype-mocking haiku alongside impossibly charming illustrations of cats.... The poems are humorous, and the illustrations amplify their whimsy, but they touch on serious questions." —Refinery29

“I love Anna Pulley’s new book…it’s as casual and funny as a conversation with your best friend, if your best friend happens to speak in haiku and wants to tell you all about lesbian sex.” —Lenny

"Pulley and Beyer...illuminate the lesbian experience using 17-syllable poems and drawings of cats to great (and funny effect)." —LA Weekly

"You couldn't dream of a better title, or a perfect party conversation piece...OMFG. How have I lived my entire life without this book?.... Read it because it's big-hearted, sometimes cringe-worthy, but always fun, funny, and sweet." —BookRiot

"A charming collection...the poems are vivid snippets of lesbian life and culture that will be very familiar to anyone who's ever lived anyplace with a thriving queer community." —Catster

“Expertly witty, punny, and gay…. Even if you think you’re not a poetry fan, or could care less for haikus, Anna’s inside jokes, astute observations, and informed opinions on queer woman and our very specific culture are all explored in accessible ways.” —AfterEllen

“A miraculous little tome…hilarious, heartbreaking, wise, and wondrous haikus and punny, funny cat illustrations to accompany them…. Kelsey’s cat illustrations are brilliant…one of the most subversive and hilarious things I’ve ever seen…. No matter where you are on your gay ol’ journey, this book has something for you…if you buy it as a gift, you’ll end up keeping it.” —Autostraddle.com