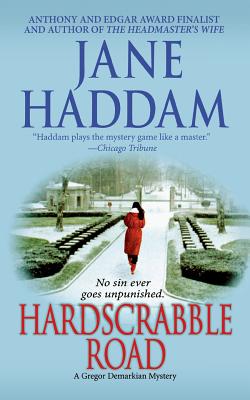 This is book number 21 in the Gregor Demarkian Novels series.

When Philadelphia's right-wing-ranting radio host Drew Harrigan is arrested for possession of illegal pain killers, he implicates a homeless man, Sherman Markey, in the drug buys, and is soon checked into a locked rehabilitation facility.

While Harrigan is away, beyond the reach of the media and the court, Markey sues him for libel and slander. With the help of a legal advocacy group, Markey is due to have his day in court...until he disappears into the city streets.

The nuns at the shelter haven't seen him. The civil lawyers can't find him. Now it's time for retired FBI agent Gregor Demarkian to step into the case-one that will lead Demarkian down a slippery slope of dark deeds and chilling revelation...with a killer lying in wait for anyone who dares to cross his path.

JANE HADDAM is the fiction pseudonym of Orania Papazoglou, the author of over thirty novels, most featuring Gregor Demarkian. She was a finalist for both the Edgar and the Anthony Award. The widow of mystery writer William DeAndrea, Haddam died in 2019.