When the Killer Man Comes: Eliminating Terrorists As a Special Operations Sniper (Hardcover) 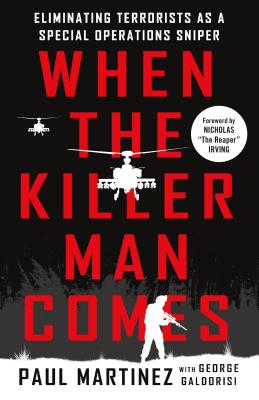 The thrilling combat memoir by special operations sniper Paul Martinez, who spent seven years in Special Operations and was a sniper assigned to 3rd Ranger Battalion.

America has one force with the single mission of direct action to capture or kill the enemy. That force is the 75th Ranger Regiment. Staff Sergeant Paul Martinez was a Ranger Sniper with the 75th Rangers during the desperate fighting in Afghanistan in 2011 when the United States made the decision to try to withdraw from Afghanistan.

It was never going to be easy. There were still a large number of senior Taliban and al Qaeda leaders and other terrorists in secure locations throughout that country. If the United States withdrew from Afghanistan with these terrorists and their networks still intact, they could quickly take over the country and undo all the gains that we made.

These terrorists needed to be eliminated, and there was only one force to do it—the Rangers. The mission was to capture or kill as many of these terrorists as possible. Paul Martinez was one of the deadliest snipers assigned to this unit, dubbed “Team Merrill,” after the Marauders of World War II fame. Martinez and his fellow Rangers faced near-impossible odds taking on an enemy who knew they were coming and who employed every conceivable tactic to kill these Rangers. In When the Killer Man Comes, Martinez tells the harrowing true story of how he and his team hunted America's enemies in an operation that would have repercussions that are still felt today.

SSG (RET) PAUL MARTINEZ spent seven years in Special Operations and was a Sniper assigned to 3rd Ranger Battalion who fought alongside and was trained by The Reaper Nicholas Irving. He was the 2nd Place Finisher at the 2010 USASOC Sniper Competition, Deployed 6 times to Afghanistan and has faced off against Chechen Snipers, Uzbek Militants, and Taliban insurgents. Martinez was the first Ranger to be selected as a liaison instructor to Special Forces Sniper Course.

GEORGE GALDORISI is a career naval aviator. His Navy career included four command tours and five years as a carrier strike group chief of staff. He has written several books, including (with Dick Couch), the New York Times best seller, Tom Clancy Presents: Act of Valor; The Kissing Sailor, which proved the identity of the two principals in Alfred Eisenstaedt's famous photograph; and over 200 articles in professional journals and other media. He is the Director of the Corporate Strategy Group at the Navy's C4ISR Center of Excellence in San Diego, California. He and his wife Becky live in Coronado, California.

NICHOLAS IRVING is the New York Times bestselling author of The Reaper and Way of the Reaper. He spent six years in the U.S. Army’s Special Operations 3rd Ranger Battalion 75th Ranger Regiment, serving in a wide range of positions, from assaulter to Sniper Team leader. He was the first African American to deploy in the G.W.O.T as a sniper in his battalion.

Irving is now the owner of HardShoot, where he trains personnel in the art of long-range shooting, from Olympians to members of the Spec Ops community. He also appeared as a mentor on the Fox reality show American Grit, and has consulted on various films and television shows. He lives in San Antonio, Texas.

"Intimate and cinematic...compelling....The confident, thrill-seeking, and patriotic Martinez, who nicknames his M110 rifle 'Miss America,' gives readers a revealing look into the mindset of a sniper who’s seen his fair share of combat." —Publishers Weekly