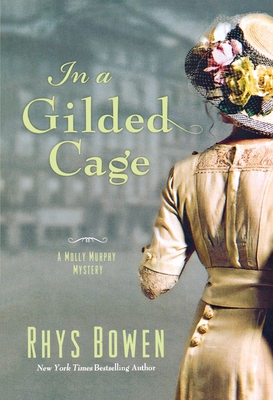 This is book number 8 in the Molly Murphy Mysteries series.

Rhys Bowen's In a Gilded Cage continues the author's award-winning historical series that breathes life into the past with its wit and charm and its complete sense of early-twentieth-century New York.

It's Easter Sunday 1918, and Irish immigrant Molly Murphy has agreed to march down Fifth Avenue with the sign-wielding suffragettes from Vassar—a civil act of protest that lands her in jail. Molly's betrothed, Police Captain Daniel Sullivan, manages to spring her from the clink, though his hands are full dealing with Chinese opium gangs.

But as soon as she's free, Molly marches straight into trouble again. Two of the Vassar alumni need Molly's help as a private investigator. One believes her uncle is cheating her out of an inheritance; the other suspects her husband is cheating with other women.

And when one of the clients dies—presumably from influenza, which is sweeping the city—Molly takes to the streets once more. Not to win the right for women to vote, but to reveal the wrongs of some very evil men…