A Cat's Tale: A Journey Through Feline History (Hardcover) 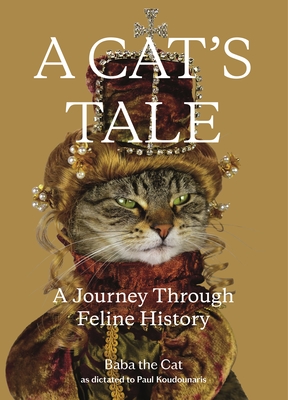 A Cat's Tale: A Journey Through Feline History (Hardcover)

"Fun, fanciful, and even informative."
—People

Since the dawn of civilization, felines have prowled alongside mankind as they expanded their territory and spread the myth of human greatness. And today, cats are peddled on social media as silly creatures here to amuse humans with their antics. But this is an absurd, self-centered fantasy. The true history of felines is one of heroism, love, tragedy, sacrifice, and gravitas. Not entirely convinced? Well, get ready, because Baba the Cat is here to set the record straight.

Spanning almost every continent and thousands—yes, thousands—of years, Baba’s complex story of feline survival presents readers with a diverse cast of cats long forgotten: from her prehistoric feline ancestors and the ancient Egyptian cat goddess Bastet to the daring mariners at the height of oceanic discovery, key intellectuals in the Enlightenment period, revered heroes from World Wars I and II, and the infamous American tabbies. Baba, a talented model in addition to a scholar, goes beyond surface-level scratches, pairing her freshly unearthed research with a series of stunning costume portraits to bring history to life.

A paws-on journey through the feline hall of fame, with in-depth research and four-legged testaments that will make you rethink who defines history, A Cat’s Tale is a one-of-a-kind chronicle that introduces readers to the illustrious ancestors of their closest companions and shows, once and for all, that cats know exactly what they’re doing.

Dr. Paul Koudounaris has a PhD in art history from UCLA and an international speaking career, and he is one of the world’s most popular historians of the eccentric, ephemeral, and macabre. A beloved fixture in the cat appreciation community, he is annually a speaker at the world’s largest cat convention, CatCon, with more than 20,000 attendees. Vice, LA Weekly, Brooklyn Paper, and the Las Vegas Review-Journal have all covered Dr. Koudounaris’s cat-related scholarship and photography.

Baba is a domestic short hair tabby with a love for adventure and history. Despite weighing in at less than nine pounds, she is big on the inside and never has any cat or human stood in the way of her getting what she wants. Born to the rough streets of Los Angeles and educated in the school of hard knocks, she was interred in the city's animal shelter at a young age only to be discovered there by her human co-author. She started modeling five years ago and has since graced websites and publications across the world, with several of her images being exhibited in gallery shows and printed as posters. A Cat's Tale is her first book, and she has offered the opinion that writing is drudgery so it will probably turn out to be her last. She still lives in Southern California, and has a sister whose food she steals and otherwise completely ignores.

"[A] charming, funny, and informative history of cats . . . full of fascinating historical anecdotes [and] hilarious color photos of Baba in various costumes and wings. . . . Even cat aficionados will learn something new—and have fun doing it."
—Publishers Weekly

"Almost certainly the most unique cat history book ever published. . . . Cats have now firmly established themselves as pop culture icons and favorite pets. But in Koudounaris' view, they still have much to say, if only we give them the chance."
—Smithsonian Magazine

"A Cat's Tale chronicles the powerful and ancient influence of cats throughout (and upon) history. This is already a standout premise—but what elevates this book into the stratosphere of literary greatness are the dozens of portraits of Baba in elaborate historic regalia."
—BookPage, "Most Anticipated Books of Fall 2020"

"Baba is a true triple threat—model, writer, and incisive cultural historian. Her work deserves its place in the pantheon of feline literary greats."
—Caitlin Doughty, New York Times bestselling author of Will My Cat Eat My Eyeballs?

“Baba—ably assisted by his amanuensis, Paul Koudounaris—introduces us to a rich cast of feline characters from the past. A Cat's Tale is an exquisitely crafted love letter to all things feline. And it is precisely the kind of delightful distraction that the world so desperately needs.”
—Lindsey Fitzharris, bestselling author of The Butchering Art and PEN/E.O. Wilson Literary Science Writing Award Winner

"A historical chronicle of our beloved felis catus and proof that cats are—and always have been—superior creatures in every way since the dawn of time. It is a true purr de force."
—Susan Michals, creator of CatCon and Cat Art Show and author of Walter Chandoha. Cats. Photographs, 1942-2018