A Crown of Swords: Book Seven of 'The Wheel of Time' (Mass Market) 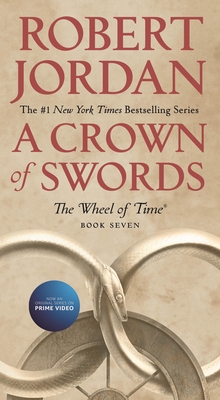 A Crown of Swords: Book Seven of 'The Wheel of Time' (Mass Market)

This is book number 7 in the Wheel of Time series.

In A Crown of Swords, the seventh novel in Robert Jordan’s #1 New York Times bestselling epic fantasy series, The Wheel of Time®, a rebellious uprising threatens Rand al’Thor's rule as he prepares to battle an even more dangerous enemy.

Incited by nobles seeking to reclaim their places of power, armies march against the Dragon Reborn. As Rand tries to restore order, he discovers a lack of loyalty even among the warrior Aiel, and still mistrusts the rebel Aes Sedai even though they swore allegiance.

But nothing can stop Rand and his Asha'man soldiers from storming the city of Illian to confront the Forsaken Sammael, and challenge him to a duel of the One Power with the winner taking the Crown of Swords...

Praise for A Crown of Swords

“The seventh volume of Jordan's bestselling high fantasy series carries on the ... colossal, dauntingly complex storytelling established by the previous entries ... Fans of the series will gobble down this generous addition.” —Publishers Weekly (starred review)

“In the long-awaited sequel to the bestselling Lord of Chaos, Jordan returns to the [same] complex, detailed fantasy world ... Highly recommended ...” —Library Journal

“In the seventh volume of Jordan's preeminent high fantasy saga, intrigue and counter-intrigue continue to roil ... This latest installment of a major fantasy epic definitely will not disappoint its fans.” —Booklist