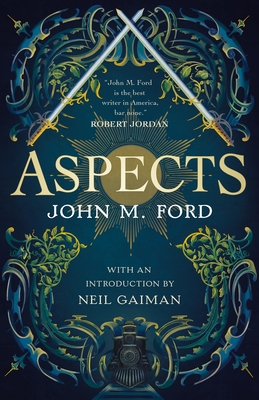 At last, the final work of John M. Ford—one of the greatest SF and fantasy authors of his time.

Enter the halls of Parliament with Varic, Coron of the Corvaric Coast.

In the years before his unexpected death, John M. Ford wrote a novel of fantasy and magic unlike any other. Politics and abdicated kings, swords and sorcerous machine guns, divination and ancient empires—finally, Aspects is here.

“A great writer who is really fucking brilliant.”—Neil Gaiman

John M. Ford (1957-2006) was a science fiction and fantasy writer, game designer, and poet whose work was held in high regard by peers ranging from Neil Gaiman to Robert Jordan to Jo Walton to Roger Zelazny, alongside innumerable others. His novels include the World Fantasy Award-winning The Dragon Waiting, the Philip K. Dick Award-winning Growing up Weightless, and the contemporary thriller The Scholars of Night. His debut novel Web of Angels (1980) has been called “cyberpunk before there was cyberpunk.” He spent the latter decade-and-a-half of his writing life in Minneapolis, Minnesota.