All That Glitters (Enchantée #1) (Paperback) 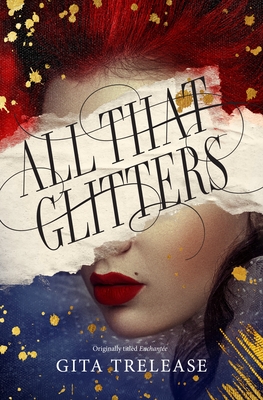 All That Glitters (Enchantée #1) (Paperback)

This is book number 1 in the Enchantée series.

Originally published as Enchantée, All That Glitters is Gita Trelease’s debut fantasy about an orphaned girl who uses dark magic to save her sister and herself is “a soaring success” (NPR)!

Paris is a labyrinth of twisted streets filled with beggars and thieves, revolutionaries and magicians. Camille Durbonne is one of them. She wishes she weren’t...

When smallpox kills her parents, Camille must find a way to provide for her younger sister while managing her volatile brother. Relying on magic, Camille painstakingly transforms scraps of metal into money to buy food and medicine they need. But when the coins won’t hold their shape and her brother disappears with the family’s savings, Camille pursues a richer, more dangerous mark: the glittering court of Louis XVI and Marie Antoinette.

Using dark magic forbidden by her mother, Camille transforms herself into a baroness and is swept up into life at the Palace of Versailles, where aristocrats both fear and hunger for magic. As she struggles to reconcile her resentment of the rich with the allure of glamour and excess, Camille meets a handsome young inventor, and begins to believe that love and liberty may both be possible.

But magic has its costs, and soon Camille loses control of her secrets. And when revolution erupts, Camille must choose—love or loyalty, democracy or aristocracy, reality or magic—before Paris burns.

Born in Sweden to Indian and Swedish parents, Gita Trelease has lived in many places, including New York, Paris, and a tiny town in central Italy. She attended Yale College and New York University, where she earned a Ph.D. in British literature. Before becoming a novelist, she taught classes on writing and fairy tales. Along with her husband and son, Gita divides her time between a village in Massachusetts and the coast of Maine. Enchantée is her debut novel.

“A soaring success. I can think of no more satisfying way to fly across the years and enjoy a gilded view of Paris as it never was but could have been, with a little magic.” —NPR

“An immersive, glittering debut that intriguingly blends history and fantasy. A striking examination of power, privilege, and choice in a limited world makes Trelease a new voice to watch.” —Booklist

“Set against the burgeoning throes of revolution, this immersive drama makes brilliant use of its conceit. Fans of substantial historical romance as well as fantasy will be thoroughly enchanted.” —The Bulletin

“An extended riff on Charles Perrault’s version of the Cinderella tale, this is an ambitious, rich and absorbing debut, featuring intrigues, balloons, midnight games of hide-and-seek among the fountains at Versailles. Gita Trelease’s [debut] is a fine teen novel that deals with concealment and identity: the young characters experiment, hiding and revealing secrets, as France tries to forge a new path. This is a thrilling account of love, passion and adventure.” —Literary Review (UK)

“A triumph which should keep young readers enthralled to the meticulously plotted end.” —The Telegraph (UK)

“A sparkling, decadent confection of a book, one with a hidden bite. Its sumptuous and evocative Paris has magical depths that will enthrall you. Be careful. Once you start reading, you won't stop until the final page.” —Jessica Cluess, author of A Shadow Bright and Burning

“A sumptuous, slow burn of a book that builds to an exciting conclusion. This is a book to be savored: from the rich, detailed descriptions of Paris on the brink of revolution; to the witty repartee and tender romance; to the dark, dangerous thread of magic woven through this wonderfully vivid world that Gita Trelease has crafted. I didn't want it to end!” —Rosalyn Eves, author of Blood Rose Rebellion

“Deliciously addictive—a lit firework crackling with treacherous magic, decadent romance, and disguises that take on lives of their own. I adore this gorgeous book.” —Stephanie Garber, author of Caraval

“Air balloons and intrigue, magic and mayhem, all in a sumptuous Paris on the verge of revolution—a delight from beginning to end.” —Alison Goodman, author of The Dark Days Club

“An intoxicating blend of opulence, magic, intrigue and romance. Gita Trelease deftly balances a spellbinding story of desperation and deceit on the precipice of the epic revolution that changed history. J’étais enchantée par ce livre.” —Alwyn Hamilton, author of Rebel of the Sands

“A heady, sparkling dream of a book. I tumbled head over heels into Gita Trelease’s dark and sumptuous magical Paris and wanted to stay there forever. One of the best fantasies I’ve read in years.” —Margaret Rogerson, author of An Enchantment of Ravens