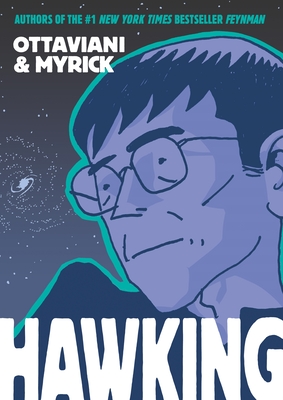 Following their New York Times-bestselling graphic novel Feynman, Jim Ottaviani and Leland Myrick deliver a gripping biography of Stephen Hawking, one of the most important scientists of our time.

From his early days at the St Albans School and Oxford, Stephen Hawking’s brilliance and good humor were obvious to everyone he met. A lively and popular young man, it’s no surprise that he would later rise to celebrity status.

At twenty-one he was diagnosed with ALS, a degenerative neuromuscular disease. Though the disease weakened his muscles and limited his ability to move and speak, it did nothing to limit his mind. He went on to do groundbreaking work in cosmology and theoretical physics for decades after being told he had only a few years to live. He brought his intimate understanding of the universe to the public in his 1988 bestseller, A Brief History of Time. Soon after, he added pop-culture icon to his accomplishments by playing himself on shows like Star Trek, The Simpsons, and The Big Bang Theory, and becoming an outspoken advocate for disability rights.

In Hawking, writer Jim Ottaviani and artist Leland Myrick have crafted an intricate portrait of the great thinker, the public figure, and the man behind both identities.

Jim Ottaviani has written fifteen (and counting) graphic novels about scientists. His most recent books include Naturalist (with E.O. Wilson), Astronauts: Women on the Final Frontier, Hawking, The Imitation Game, a biography of Alan Turing, Primates, about Jane Goodall, Dian Fossey, and Biruté Galdikas; and Feynman, about the Nobel-prize winning physicist, artist, and raconteur. His books are New York Times bestsellers, have been translated into a dozen languages, and have received praise from publications ranging from Nature and Physics World to Entertainment Weekly and Variety.

Jim lives in Michigan and comes to comics via careers in nuclear engineering and librarianship.

Leland Myrick is the Ignatz Award- and Harvey Award-nominated author and illustrator of The Sweet Collection and Bright Elegy. His writing and illustrations have appeared in publications as diverse as Dark Horse Comics, GQ Japan and Vogue Russia. He grew up in Missouri, a place that has inspired much of his poetry and art, and he now lives in Pasadena, California, with his wife and daughter.

"This smart and wondrously exploratory scientific biography reveals as much about black holes as the man who explored them." —Publishers Weekly

"Readers new to Hawking's ideas, and particularly his enigmatic musings about the nature of time, will find this book, cartoonish as it is, to be full of insight; the science is sharp and to the point...Every world-changing scientist deserves such an entertaining but factually rich treatment." —Kirkus Reviews

"A well-rounded study of physics and one of its brightest stars." —Booklist

"Packed with scientific theory, this graphic biography of a scientific luminary will appeal to budding physics and cosmology enthusiasts." —School Library Journal

"Having tackled towering intellects such as Dian Fossey, Alan Turing and Richard Feynman, the great Jim Ottaviani turns to the late Stephen Hawking. The intellectually thrilling result does not disappoint." —The Star Tribune