Hi, I'm an Atheist!: What That Means and How to Talk About It with Others (Paperback) 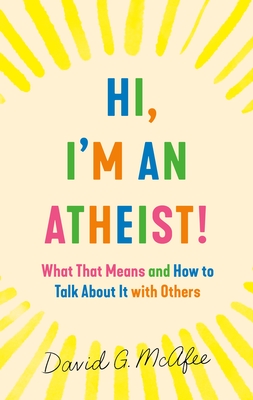 Hi, I'm an Atheist!: What That Means and How to Talk About It with Others (Paperback)

The essential guide to coming out as a non-believer.

David G. McAfee was raised in a conservative American Christian household, so one day, when he stopped going to church—and revealed he didn't believe in gods—his family was shocked. He quickly realized that atheists are misunderstood, frequently thought of as Satan worshippers and anarchists. Thus started McAfee's journey to his true self, and his crusade to tell others—especially those who are devoutly religious—what atheism really is, what he believes in, and why atheists should not be feared.

In this plainspoken and approachable book, McAfee looks at what an atheist believes and the best way to “come out” as an atheist to one’s friends, family, and co-workers. He acknowledges the challenges atheists encounter in talking to others about their beliefs and offers sound advice on how to overcome the difficult moments in any “coming out” conversation. Including a resource guide both for people just coming to atheism and people who have been atheists for years as well as an interview with Rebecca Vitsmun, the woman made famous for coming out as an atheist live on CNN, Hi, I’m an Atheist! is a smart, sensitive, and realistic guide to living one’s life positively and honestly without the need for a belief in God.

David G. McAfee is a journalist, religious studies scholar, and author of Disproving Christianity and other Secular Writings, as well as a contributor to American Atheist magazine. McAfee attended University of California, Santa Barbara, and graduated with a dual-degree in English and Religious Studies with an emphasis on Christianity and Mediterranean religions. He lives in California.

“This book is for any and all newly-realized heretics, including those still in the closet: it's not a rule book or a Decalogue, but necessary compass bearings, sound advice, and a handy, hefty guide to atheist resources and support systems—all the tools you need to help in the search to find your joy in a big, scary, wonderful, godless universe like ours.” —David Fitzgerald, author of Nailed and The Complete Heretic’s Guide to Western Religion series

“As a nonreligious parenting author and speaker, I hear countless stories from people who have left religious belief. The actual loss of faith is rarely described as the greatest problem. It’s what comes next, the reactions of those around us, that can be most challenging. David McAfee tackles the issue of coming out atheist with clarity and insight, helping new atheists better understand their own transitions out of religion while bringing those around them to a better understanding of what has changed and—just as important—what has not.” —Dale McGowan, author and editor of Parenting Beyond Belief and Raising Freethinkers

"Hi, I'm an Atheist! is so profoundly personal and considers the spectrum of emotion one grows through that it perfectly captures the universal experience of re-becoming an atheist. It will gently but concisely lead you through self-discovery, reconstructing your closest relationships, and building a new community around yourself. It is a perfect guide for closeted atheists, budding atheists, and atheists confronting situations in which religious people find comfort in their beliefs."– Claire Klingenberg, President of the European Council of Skeptical Organizations

"David McAfee’s Hi, I’m an Atheist! is an important contribution . . . and his courage in coming out as a nonbeliever will further bend the arc of the moral universe toward justice for all, including and especially atheists." —Michael Shermer, publisher of Skeptic magazine and author of Why People Believe Weird Things, The Believing Brain, and The Moral Arc

"Whether you have been freshly disabused of supernatural beliefs and find yourself struggling to contextualize faithless values, or you're a long-time non-believer mystified by suspicions that you're a moral monster, David McAfee provides thoughtful, engaging approaches to constructively discussing non-belief." —Lucien Greaves, cofounder, spokesperson, The Satanic Temple

"David G. McAfee has written the definitive handbook on a very tricky subject: coming out as a non-believer. We at Recovering from Religion recommend it frequently, and our clients report that it is a very helpful resource." —Dr. Darrel Ray, founder of Recoveringfromreligion.org, author of The God Virus