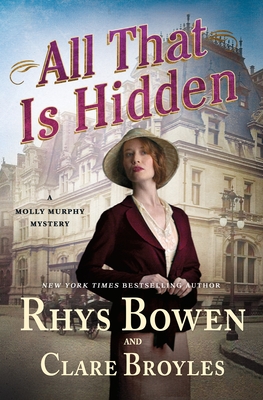 This is book number 19 in the Molly Murphy Mysteries series.

New York, Autumn, 1907: Former private detective Molly Murphy Sullivan is happy with her place in the world. She and her policeman husband, Daniel, have built quite a life for themselves in Greenwich Village, in their modest-yet-beautiful-home in Patchin Place, filled with family, friends, and laughter. Molly and Daniel have a good marriage, a true partnership where they value each other’s opinions in all things.

So when he tells her they’re moving to a fancy home on Fifth Avenue—and that he’s running for the sheriff of New York—Molly is left reeling. Daniel begs Molly to trust him, but why would he run for sheriff on the Tammany ticket? A party known more for kickbacks and quid pro quo than anything else, it used to be everything Daniel despised. So what’s changed? And why didn’t he discuss it with her beforehand? Molly can’t help but wonder what Daniel’s got himself tangled up in… and whether he needs her help to get out.

In this next installment in this beloved series All That Is Hidden, the incomparable Molly is drawn into the dangerous world of politics, forced to navigate through the webs of lies and deceit which are hidden behind a veil of vast wealth and grandeur.

CLARE BROYLES, who is Rhys Bowen's daughter, is a teacher and a musician. She began collaborating with her mother on the Molly Murphy mystery series with Wild Irish Rose. She has worked as a composer and arranger in the theater for both Arizona Theater Company and Childsplay and was nominated for an Arizone 'Zoni' theater award. Clare is married to a teacher and they have three children.

“The clever and adventurous heroine dissects a complicated mystery while standing up for women’s rights.” —Kirkus Reviews

“[Bowen and Broyles deliver] a satisfying domestic mystery, rich in the details of running a middle-class urban household in the early twentieth century.” —Booklist