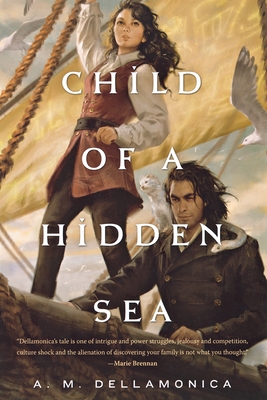 By A. M. Dellamonica

This is book number 1 in the Hidden Sea Tales series.

Child of a Hidden Sea by A.M. Dellamonica is a rousing tale of adventure and adversity, politics and personal trials

One minute, twenty-four-year-old Sophie Hansa is in a San Francisco alley trying to save the life of the aunt she has never known. The next, she finds herself flung into the warm and salty waters of an unfamiliar world. Glowing moths fall to the waves around her, and the sleek bodies of unseen fish glide against her submerged ankles.

The world is Stormwrack, a series of island nations with a variety of cultures and economies—and a language different from any Sophie has heard.

Sophie doesn't know it yet, but she has just stepped into the middle of a political firestorm, and a conspiracy that could destroy a world she has just discovered...her world, where everyone seems to know who she is, and where she is forbidden to stay.

But Sophie is stubborn, and smart, and refuses to be cast adrift by people who don't know her and yet wish her gone. With the help of a sister she has never known, and a ship captain who would rather she had never arrived, she must navigate the shoals of the highly charged politics of Stormwrack, and win the right to decide for herself whether she stays in this wondrous world...or is doomed to exile.

A.M. DELLAMONICA is the author of Indigo Springs, which won the Sunburst Award for Canadian Literature of the Fantastic. Her short fiction has appeared in Asimov’s, Realms of Fantasy, Sci-Fiction and Strange Horizons, and in numerous anthologies; her 2005 alternate-history Joan of Arc story, “A Key to the Illuminated Heretic,” was shortlisted for the Sideways Award and the Nebula Award. Dellamonica lives in Toronto, Ontario.

"This was a solid, enjoyable book, entirely appreciable on its own while setting up interesting hooks for future installments."—NPR