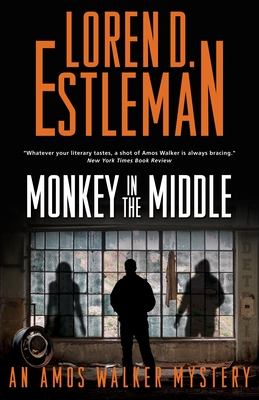 This is book number 30 in the Amos Walker Novels series.

From the master of the hard-boiled detective novel and recipient of the Private Eye Writers of America Lifetime Achievement Award comes Loren D. Estleman's next enthralling Amos Walker mystery, Monkey in the Middle

The monkey in the middle is the one who “hears no evil.”

Private eye Amos Walker doesn’t have that luxury. Hearing the truth, on the other hand, is a lot less common, even from people who need his help.

It’s summer in Detroit and Walker’s just received word that his ex-wife has passed away. He can use a distraction, which arrives in the form of a young, would-be investigative journalist who has gotten in way over his head. He needs Walker’s protection, but is suspiciously vague about why and from whom. And he’s not the only one playing their cards way too close to their chest, including:

- A bestselling author who claims to be retired, but who knows a good story when he hears one.
- A fugitive whistleblower who skipped out on a $100,000 bond.
- A headline-hungry defense attorney who spends as much time before the TV cameras as in court.
- A career assassin with whom Walker has a long, ugly history.

Not to mention any number of covert government agencies pursuing their own agendas, possibly in opposition to each other.

Walker just wants answers, but what he finds is a dead body—and enough trouble to put him on ice for good, unless he can discover what everyone’s not telling him.

Loren D. Estleman is the author of more than eighty novels, including the Amos Walker, Page Murdock, and Peter Macklin series. The winner of four Shamus Awards, five Spur Awards, and three Western Heritage Awards, he lives in Central Michigan with his wife, author Deborah Morgan.