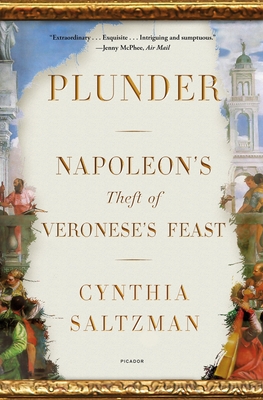 “A highly original work of history . . . [Saltzman] has written a distinctive study that transcends both art and history and forces us to explore the connections between the two.” —Roger Lowenstein, The Wall Street Journal

A captivating study of Napoleon’s plundering of Europe’s art for the Louvre, told through the story of a Renaissance masterpiece seized from Venice

Cynthia Saltzman’s Plunder recounts the fate of Veronese’s Wedding Feast at Cana, a vast, sublime canvas that the French, under the command of a young Napoleon Bonaparte, tore from a wall of the monastery of San Giorgio Maggiore, on an island in Venice, in 1797. Painted in 1563, the Renaissance picture had been immediately hailed as a masterpiece. Veronese had spread the scene across the end wall of the monastery’s refectory and filled it with some 130 figures, lavishing color on the canvas to build the illusion that the biblical banquet was taking place on a terrace in sixteenth-century Venice. Once it was pulled from its frame, the canvas crossed the Mediterranean rolled on a cylinder, bound for Paris; soon after, artworks commandeered in Venice and Rome were triumphantly brought to the French capital. In 1801, the Veronese went on exhibition at the Louvre, the new public art museum founded during the Revolution, in the former palace of the French kings.

As Saltzman tells the larger story of Napoleon’s looting of Italian art and its role in the creation of the Louvre, she reveals defining traits of his character: his desire for greatness and his ruthlessness in getting whatever he sought. After Napoleon’s defeat at Waterloo in 1815, the Duke of Wellington and the Allies forced the French to return many of the paintings and sculptures they had seized. Nevertheless, the French resisted sending The Wedding Feast at Cana back to Venice, and the painting remains in Paris to this day, hanging directly opposite the Mona Lisa.

Expertly researched and deftly told, Plunder chronicles one of the most spectacular art-appropriation campaigns in history, shedding light on a seminal historical figure and the complex origins of one of the world’s great museums.

Cynthia Saltzman is the author of Portrait of Dr. Gachet: The Story of a Van Gogh Masterpiece and Old Masters, New World: America’s Raid on Europe’s Great Pictures. A former reporter for Forbes and The Wall Street Journal, she is the recipient of a fellowship from the Guggenheim Foundation and has degrees in art history from Harvard and the University of California at Berkeley. She lives in Brooklyn, New York.

“A highly original work of history . . . [Saltzman] depicts [Napoleon] with masterly economy, as a brilliant tactician riddled with personal conceits and vanity . . . Saltzman seems equally conversant with 18th-century art criticism and the period’s politics . . . Plunder is supported by prodigious research . . . [Saltzman] has written a distinctive study that transcends both art and history and forces us to explore the connections between the two.” —Roger Lowenstein, The Wall Street Journal

"In Plunder, [Saltzman] moves with enviable ease and clarity between periods and narratives . . . Her research is meticulous but her style is light, enlivened by acute sketches of minor characters: the crowded scene of The Wedding Feast at Cana could almost be a model for the book’s structure." —Jenny Uglow, The New York Review of Books

"Saltzman is sensitive to the complexity of debates about the educational and aesthetic benefits of moving works of art from one place to another . . . [She] is excellent on the technicalities of producing and conserving paintings. She vividly evokes the Venetian setting in which Veronese worked." —Ruth Scurr, Times Literary Supplement

“[A] well-written, carefully constructed, artistic gem of a book . . . [Saltzman is] a skilled art historian who is both perceptive and gifted, showing an appreciation of the multi-faceted character of paintings and their subsequent history. Moreover, Saltzman can convey her knowledge with clarity as well as wisdom . . . This is an excellent book . . . Beautifully produced and handsomely illustrated, the book is an attractive and salutary account of art and war.” —Jeremy Black, The New Criterion

"Napoleon Bonaparte, one of history’s most prolific art looters, plundered famous works from across Europe to stock the newly created Louvre Museum. In this fascinating tale, art historian Cynthia Saltzman describes how he stole one of Venice’s most important paintings and why, 225 years later, it remains in Paris." —The Christian Science Monitor

“Extraordinary . . . Saltzman’s latest work is an exquisite example of micro-history in which she demonstrates a meticulous attention worthy of Veronese . . . Intriguing and sumptuous.” —Jenny McPhee, Air Mail

"The fascination of Saltzman’s splendid book lies to a significant degree in her subtle contrast of the tumultuous immensity of Bonaparte’s aspirations and the serenity of Veronese’s painting . . . Thoroughly at ease in the Venetian Renaissance and French imperial worlds, Cynthia Saltzman tells this story with Veronesian panache." —Jonathan Keates, Literary Review

“A compelling account of the fragility of beauty before avarice . . . It is heartbreaking to read Saltzman’s description of the way in which Veronese’s vast masterpiece, under the well-meaning supervision of Pietro Edwards, the republic’s chief restorer, was ripped from the wall of the refectory, with holes left where nails had been painted over by the hand of the artist, with its body divided, rolled up and packaged for the perilous and damp voyage to Paris . . . Saltzman’s thrilling blend of historical narrative and art criticism is fitting testimony to its enduring greatness.” —Paul Lay, The Times (London)

"[A] fascinating and wide-ranging cultural history, at the center of which is the fate of one of the Renaissance’s greatest paintings . . . Among the most chilling pages of Saltzman’s forensic narrative is her account of the damage suffered by Veronese’s painting on its journey to Paris." —Michael Prodger, The Sunday Times

"Saltzman’s fascinating and deeply rewarding book [is] underpinned by wide research and an impressive grasp of techniques and technicalities . . . A delight to read." —Adam Zamoyski, The Telegraph

"By recounting the long, strange journey of this painting through unsuspected wars, bloodshed, perilous seas, and finally, its close escape from Nazi hands, Saltzman makes one appreciate the beauty of The Wedding Feast at Cana anew. That it still exists is a miracle all by itself. I hope she will keep on looking for new miracles." —Meryle Secrest, The American Scholar

"A rich account of Napoleon’s looting of Italian masterpieces . . . Saltzman unearths fascinating details . . . a rich and rewarding look at the legacy of wartime art theft and the turbulent life of an Italian masterpiece." —Publishers Weekly

Art historian Saltzman’s narrative is packed with drama and detail . . . With its extensive bibliography and compelling story, Plunder will appeal to everyone interested in Western art and civilization.” —Carolyn Mulac, Booklist

“A fascinating overview of Venetian artworks, artists, patrons, techniques, and pigments . . . Readers with an interest in art history and those with an interest in stolen art . . . will appreciate this well-researched and well-written history.” —Laurie Unger Skinner, Library Journal

“‘Taking without taste, without choice, is ignorance and near vandalism,’ Napoleon’s advisers reminded him. He had no such intention. For a Venetian war trophy he set his sights on Veronese’s masterpiece, ‘liberated’ from a damp wall in 1797, wrapped around a cylinder, and shipped in a crate to the Louvre, where it became a different painting, changed the course of Western art, and where—half its lifetime later—it hangs still today. Cynthia Saltzman offers up a rich, thrilling master class on the art of power and the power of art, contemplating triumphs of both kinds, as well as the fate of glory when pinned to a wall.” —Stacy Schiff, author of The Witches and Cleopatra

“Cynthia Saltzman guides us on a fascinating journey from sixteenth-century Venice to Napoleonic France, telling a story as spellbinding—and as peopled with vibrant characters—as Veronese’s canvas itself. Plunder shows how even the greatest masterpieces can fall victim to power politics, personal ambition, and the grim vicissitudes of history.” —Ross King, author of Mad Enchantment, The Judgment of Paris, and Brunelleschi’s Dome

"Veronese’s Wedding Feast at Cana—the greatest party ever put to paint—is the ripe plum at the center of this artful, deeply-researched, and sumptuous account of Napoleon’s plunder of European art. Cynthia Saltzman, much like Veronese himself, uses her story to bring to vivid life a large and colorful cast of characters, ranging from ambitious artists to plotting diplomats. We watch Veronese paint. We see Napoleon sulk. This book is a feast all its own." —Mark Stevens, coauthor with Annalyn Swan of de Kooning: An American Master and Francis Bacon: Revelations

“Meticulously investigated, Cynthia Saltzman’s Plunder is an epic account, as grand as the painting that is at the heart of this tragic story.” —Xavier F. Salomon, deputy director and Peter Jay Sharp chief curator at the Frick Collection

“With evocative prose, Cynthia Saltzman traces the journey of one of the greatest of all Italian paintings—Paolo Veronese’s Wedding Feast at Cana—from the refectory of a monastery in Venice to its current home, where it faces the Mona Lisa in the busiest room of the Louvre. Moving deftly from the sixteenth century to the eighteenth to the twenty-first, Saltzman brings to life dozens of characters connected to this masterpiece. This lively account offers valuable perspective to all who care about the world’s artistic treasures and our responsibility to preserve them for future generations.” —Frederick Ilchman, chair of the Art of Europe at the Museum of Fine Arts, Boston, and chairman of Save Venice