Claimed to Save His Crown (Large Print / Mass Market Paperbound) 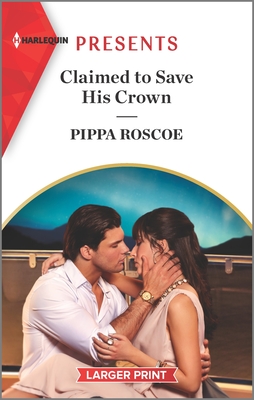 Claimed to Save His Crown (Large Print / Mass Market Paperbound)


Ships to Our Store in 1-5 Days
In this dramatic romance from Pippa Roscoe, will she become a part of his royal world?

From Cinderella in the palace shadows...
To his unexpected queen

Lady-in-waiting Henna would do anything for the royal family that gave her a home when her own wouldn't. So after Henna stops a marriage that would protect King Aleksander's throne but ruin his life, she must face the Ice King's fury

Aleks's coldhearted reputation isn't a secret. His tough exterior is designed to fiercely guard against the heartbreak that once tore his world apart. But then a transformational kiss with Henna awakens him to a surprising new possibility that could save his crown... And it starts with her

From Harlequin Presents: Escape to exotic locations where passion knows no bounds. Read all The Royals of Svardia books:

Book 1: Snowbound with His Forbidden Princess
Book 2: Stolen from Her Royal Wedding
Book 3: Claimed to Save His Crown