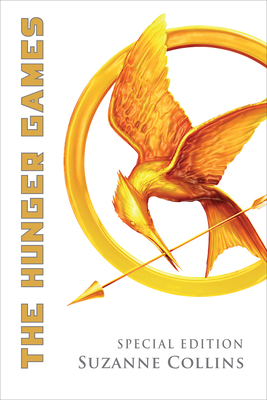 This is book number 1 in the The Hunger Games series.

This Special Edition of The Hunger Games includes the most extensive interview Suzanne Collins has given since the publication of The Hunger Games; an absorbing behind-the-scenes look at the creation of the series; an engaging archival conversation between Suzanne Collins and YA legend Walter Dean Myers on writing about war; and a timeline of highlights from the first ten years of The Hunger Games. The Special Edition answers many questions fans have had over the years, and gives great insight into the creation of this era-defining work.In the ruins of a place once known as North America lies the nation of Panem, a shining Capitol surrounded by twelve outlying districts. The Capitol is harsh and cruel and keeps the districts in line by forcing them all to send one boy and one girl between the ages of twelve and eighteen to participate in the annual Hunger Games, a fight to the death on live TV.Sixteen-year-old Katniss Everdeen regards it as a death sentence when she steps forward to take her sister's place in the Games. But Katniss has been close to death before -- and survival, for her, is second nature. Still, if she is to win, she will have to start making choices that weigh survival against humanity and life against love.
Suzanne Collins is the author of the bestselling Underland Chronicles series, which started with Gregor the Overlander. Her groundbreaking young adult novels, The Hunger Games, Catching Fire, and Mockingjay, were New York Times bestsellers, received wide praise, and were the basis for four popular films. She returned to the world of Panem with The Ballad of Songbirds and Snakes. Year of the Jungle, her picture book based on the year her father was deployed in Vietnam, was published in 2013 to great critical acclaim. To date, her books have been published in fifty-three languages around the world.