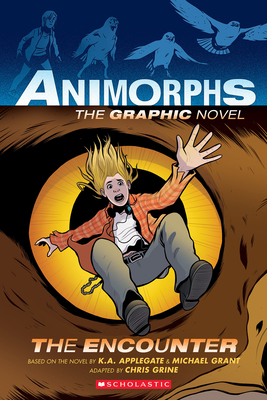 When Tobias and his friends were given the power to morph, they were also given an important warning: Never stay in a morph for more than two hours. But Tobias broke the time limit, and now he's trapped in the body of a hawk -- forever.

When he discovers an important Yeerk secret, Tobias knows he has to do everything in his power to destroy it. But to do so, he'll have to contend with a part of himself that's wrestling for dominion. A part that isn't human.

For Tobias, the fight against the Yeerks is more pressing than ever -- not just for humankind, but for his own humanity.

K.A. APPLEGATE is the author of the bestselling Animorphs series, as well as the Remnants and Everworld series, Home of the Brave, and the Roscoe Riley Rules series. She lives in Tiburon, California.

Praise for The Invasion (Animorphs Graphix #1):

“Sure to be a hit . . . A strong start to a new graphic novel series for young readers.” -- School Library Journal

“This graphic adaptation of the first book in the long-running Animorphs series . . . brings to life the humor and horror of the original.” -- Booklist

"[The Animorph books] were dark and witty and thrilling, endlessly inventive and achingly sad. They made me laugh out loud and cry myself to sleep. I've been thinking about them for twenty years." -- The Paris Review

"There's clearly something about Animorphs that has kept kids enthralled." -- Publishers Weekly