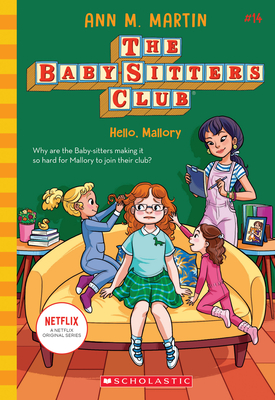 This is book number 14 in the The Baby-Sitters Club series.

America's favorite series returns with a new look and a Netflix tv show.

Mallory Pike has always wanted to be a member of the Baby-sitters Club. The Baby-sitters are so much fun to be around, and so grown-up. Now the club members have invited Mallory to a meeting. This might be her big chance!

But the Baby-sitters don't make it easy. First Claudia makes Mal feel like a baby on her first official baby-sitting job. Then they give her a written test-with questions nobody could answer!

Mallory's beginning to think she doesn't want to be part of the Baby-sitters Club. Maybe with her new friend Jessi she'll start a club of her own...

It's time to show those Baby-sitters what a couple of new girls can do!

The best friends you'll ever have!

Ann M. Martin is the creator of The Baby-sitters Club, which has more than 190 million books in print, making it one of the most popular series in the history of publishing. Her novels include A Corner of the Universe (a Newbery Honor Book), Belle Teal, Here Today, A Dog's Life, On Christmas Eve, and the Main Street and Family Tree series, as well as the much-loved collaborations P.S. Longer Letter Later and Snail Mail No More, with Paula Danziger. Ann lives in upstate New York.