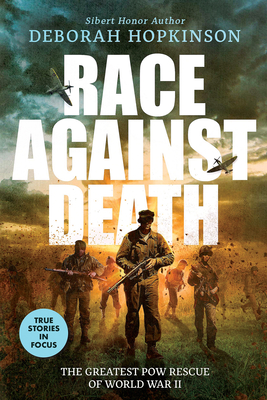 Following the bombing of Pearl Harbor, America entered World War II, and a new theater of battle opened up in the Pacific. But US troops, along with thousands of Filipino soldiers who fought alongside them, were overtaken in the Philippines by a fiercely determined Japanese navy, and many Americans and Filipino fighters were killed or captured.

These American and Filipino prisoners of war were forced to endure the most horrific conditions on the deadly trek known as the Bataan Death March. Then, the American servicemen who were held captive by the Japanese military in Cabanatuan Camp and others in the Philippines, faced beatings, starvation, and tropical diseases, and lived constantly under the threat of death.

Unable to forget their comrades’ fate and concerned that these POWs would be brutally murdered as the tides of war shifted in the Pacific, the US Army Rangers undertook one of the most daring and dangerous rescue missions of all time. Aided by the “Angels of the Underground,” the Sixth Ranger Battalion and courageous Filipino guerrilla soldiers set out on an uncertain and treacherous assignment. Often called the Great Raid, this remarkable story remains largely forgotten.

Sibert Honor author Deborah Hopkinson presents an extraordinary and unflinching look at the heroic servicemen and women who courageously weathered the worst of circumstances and conditions in service to their country, as well as those who answered the call to save their fellow soldiers.

Deborah Hopkinson is the highly acclaimed author of thrilling, accessible, and compelling nonfiction for every reader. She has written over forty award-winning books, including Titanic: Voices from the Disaster, a YALSA Excellence in Nonfiction Award Finalist and Sibert Honor Book; D-Day: The World War II Invasion that Changed History; We Had to be Brave: Escaping the Nazis on the Kindertransport, which was a Kids' Book Choice Award Nominee and a Sydney Taylor Notable Book; We Must Not Forget; the forthcoming Race Against Death; and her series for Grades 2-5, The Deadliest, which are action-packed, photo-filled nonfiction titles about disasters throughout history. Deborah lives outside Portland, Oregon.

Praise for We Had to Be Brave: Escaping the Nazis on the Kindertransport:

* "Historical context, personal stories, and letters are seamlessly integrated in this history of frightened refugee children in a new land and their brave parents' making 'the heart-wrenching decision' to send their children away with strangers to a foreign country. Well-crafted, accessible, and essential." -- Kirkus Reviews, starred review

"[A] moving tribute to the organizers of the Kindertransport and to the courage of the children involved. Generously illustrated with black-and-white photographs, the book is extremely well researched and a valuable contribution to Holocaust literature." -- Booklist

Praise for D-Day: The WWII Invasion that Changed History:

"Hopkinson is particularly adept at directing attention to the stories behind the heroic stories." -- Bulletin of the Center for Children's Books

"How does an author sequentially chronicle multiple, rapidly developing, and simultaneous events and maintain not just coherence, but suspense? Hopkinson employs her signature kaleidoscopic style effectively here: synthesizing complex events into a compelling narrative arc, and sampling myriad voices to add texture and color to the story, while never losing sight of the bigger picture." -- The Horn Book

"Such major figures as Dwight D. Eisenhower and Omar Bradley get plenty of attention, but more is given to the experiences of the soldiers who waded ashore under fire or parachuted behind enemy lines. Hopkinson weaves their personal accounts with those of observations by Ernie Pyle and others to bring the invasion vividly to life... An attractively packaged, engrossing history that will appeal to readers fascinated with military strategy." -- Kirkus Reviews

"With thoroughness and clarity, this title brings D-Day into focus by breaking it down into components and focusing on human voices and perspectives... provides a wealth of information clearly presented alongside many black and white photos, resulting in an engaging read even for those who may not be interested in a book about military history. The complexity of the historical task undertaken, the challenges of the terrain, and the courage required of those involved is conveyed by the author without hyperbole and by allowing the participants to tell their own stories. Highly Recommended." -- School Library Connection

Praise for Dive! World War II Stories of Sailors & Submarines in the Pacific:

* "Readers wait anxiously alongside crew members amid silence and dangerous heat and oxygen levels as the submariners narrowly escape enemy detection or brace for depth charge explosions that rattle bones, fray nerves, and signal possible death... With a fascinating blend of submarine mechanics and tales of courage, readers will dive in deep." -- Booklist, starred review

* "It's an appealing, engrossing package for readers fascinated by heroism and military strategy." -- The Horn Book, starred review

"The real appeal, of course, is danger and heroism, and in drawing liberally from first-person accounts by surviving veterans, Hopkinson often emulates the tone of Greatest Generation memoir... And kudos to Hopkinson, whose eagle eye even located the contingent of women nurses evacuated by sub from the Philippines." -- Bulletin of the Center for Children's Books

"[A] spirited, inspiring, and extremely well-researched book... ideal for both classroom use and independent reading." -- Booklist

"With numerous pictures and illustrations accompanying the text, this is a fascinating look at a little-known corner of WWII." -- Publishers Weekly

Praise for Titanic: Voices from the Disaster:

A YALSA Award for Excellence in Nonfiction Finalist

An ALA Notable Children's Book

A Kirkus Reviews Best Young Adult Book of the Year

"An affecting portrait of human ambition, folly and almost unbearable nobility in the face of death." -- The Wall Street Journal

"A meticulous recounting of the disaster... Hopkinson's reporting is so rich with information that it will be equally fascinating to young readers and adults alike." -- Los Angeles Times

* "Hopkinson knows precisely what's she doing in her coverage of the Titanic disaster... [A] fine book." -- The Horn Book, starred review

Praise for Up Before Daybreak:

* "Rarely have the links between northern industry, southern agriculture, slavery, war, child labor, and poverty been so skillfully distilled for this audience." -- Booklist, starred review

Praise for Shutting Out the Sky:

An ALA Notable Book

Praise for We Must Not Forget: Holocaust Stories of Survival and Resistance: