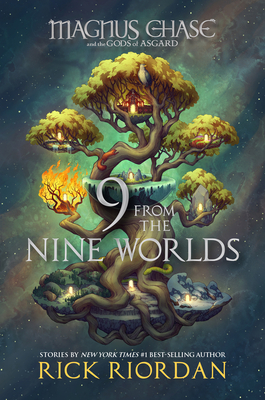 
Available at One of Our Locations
Beloved characters from the Magnus Chase series star in these short stories, each set in a different one of the Nine Worlds from Norse mythology.
The Magnus Chase and the Gods of Asgard trilogy may have concluded, but we haven't heard the last of our favorite peeps from the Nine Worlds.
Join Hearthstone, Blitzen, Samirah, Alex, Jack, T.J., Mallory, Halfborn, and more on a hilarious and unforgettable journey through Rick Riordan's unique take on Norse mythology.
While Magnus is off visiting his cousin, Annabeth, his friends find themselves in some sticky, hairy, and smelly situations as they try to outwit moronic giants, murderous creatures, and meddlesome gods.
Can they stave off Ragnarok at least until Magnus gets back?
Rick Riordan, dubbed "storyteller of the gods" by Publishers Weekly, is the author of five #1 New York Times best-selling middle grade series with millions of copies sold throughout the world: Percy Jackson and the Olympians, The Heroes of Olympus, and the Trials of Apollo, based on Greek and Roman mythology; the Kane Chronicles, based on Ancient Egyptian mythology; and Magnus Chase and the Gods of Asgard, based on Norse mythology. Rick collaborated with illustrator John Rocco on two #1 New York Times best-selling collections of Greek myths for the whole family: Percy Jackson's Greek Gods and Percy Jackson's Greek Heroes. He is also the publisher of an imprint at Disney Hyperion, Rick Riordan Presents, dedicated to finding and promoting other authors of mythology-based fiction based on cultures from around the world. Rick lives in Boston, Massachusetts with his wife and two sons. Follow him on Twitter at @camphalfblood.

PRAISE FOR THE SHIP OF THE DEAD

"Black, deaf, trans, Muslim, white, homeless, and formerly homeless readers will see characters like themselves cracking jokes and caring for one another, with identities that are crucial to success rather than a distraction or side issue. The climax, a deeply emotional testament to the power of community, could leave some in tears. Riordan is again fighting for a revolution in middle-grade fiction with his funny, whiplash-fast writing and deep moral convictions."—Kirkus Reviews