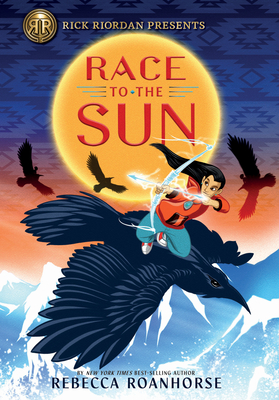 “Nizhoni Begay is a heroine you won’t soon forget! Roanhorse delves into Native American mythology with glee as Nizhoni learns about her heritage and what it takes to become a hero. With a colorful cast of characters—Mr. Yazzie the horned toad being a personal favorite—it’s a race to the sun god for mythical weapons so Nizhoni and company can free her father from a tyrannical monster (who also happens to be an oil baron).”
— Sami Thomason, Square Books, Oxford, MS

*"Fans of Hugo and Nebula winner Roanhorse will appreciate her fast-paced prose, page-turning chapter endings, and most of all, strong female protagonist."--Kirkus Reviews (starred review)

Lately, seventh grader Nizhoni Begay has been able to detect monsters, like that man in the fancy suit who was in the bleachers at her basketball game. Turns out he's Mr. Charles, her dad's new boss at the oil and gas company, and he's alarmingly interested in Nizhoni and her brother, Mac, their Navajo heritage, and the legend of the Hero Twins. Nizhoni knows he's a threat, but her father won't believe her.

When Dad disappears the next day, leaving behind a message that says "Run!", the siblings and Nizhoni's best friend, Davery, are thrust into a rescue mission that can only be accomplished with the help of Diné Holy People, all disguised as quirky characters. Their aid will come at a price: the kids must pass a series of trials in which it seems like nature itself is out to kill them. If Nizhoni, Mac, and Davery can reach the House of the Sun, they will be outfitted with what they need to defeat the ancient monsters Mr. Charles has unleashed. But it will take more than weapons for Nizhoni to become the hero she was destined to be . . .

Timeless themes such as the importance of family and respect for the land resonate in this funny, fast-paced, and exciting quest adventure set in the American Southwest.

Endorsed by Rick Riordan, author of Percy Jackson and the Olympians, soon to be a series on Disney+.
Rebecca Roanhorse (www.RebeccaRoanhorse.com) is a Black/Indigenous (Ohkay Owingeh) writer of speculative fiction, including the New York Times best-selling Resistance Reborn, two adult books in the Sixth World series, Trail of Lightning and Storm of Locusts, and a Nebula and Hugo-winning short story, "Welcome to Your Authentic Indian Experience." Race to the Sun is her middle grade debut. Before she became a full-time writer, Rebecca was a lawyer who worked behalf of Native Americans. She lives in Northern New Mexico with her Navajo husband and their daughter. Follow her on Twitter @RoanhorseBex.
Fans of Hugo and Nebula winner Roanhorse (Ohkay Owingeh) will appreciate her fast-paced prose, page-turning chapter endings, and most of all, strong female protagonist. By reimagining a traditional story in a contemporary context, populating it with faceted Native characters, and centering it on and around the Navajo Nation, Roanhorse shows that Native stories are active and alive.Native readers will see themselves as necessary heroes while readers of all walks will want to be their accomplices.—Kirkus

Roanhorse (the Sixth World series for adults), who is Ohkay Owingeh and African-American, draws on her husband’s heritage to reimagine Navajo stories and characters, delivering a fast-paced, exciting adventure. While the antagonists could stand further development, Nizhoni’s blend of snark, confidence, and humor proves as multifaceted as the satisfying tale’s focus on friendship, family, and cultural legacy.—Publishers Weekly