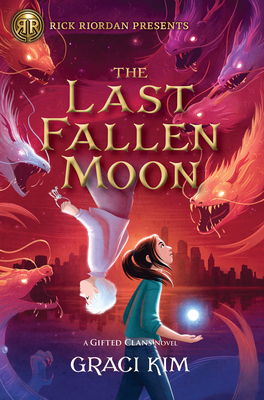 "Graci Kim does such an amazing job of blending Korean mythology into the modern world, I am now wondering how I ever lived without knowing all this cool information."—New York Times #1 best-selling author Rick Riordan

For Riley Oh, life as the Godrealm’s last fallen star is not all it’s cracked up to be. Her new divine heritage doesn’t even come with cool magical powers; half of her friends and family (including her parents) can’t remember her; and to top it all off, the entire Gom clan is mad at her for killing the Cave Bear Goddess and stripping away their healing abilities.

But when their anger boils over and a group of witches curse Riley’s home, she knows it’s up to her to restore magic back to her clan – even if it means sneaking into the Spiritrealm.

Luckily, Riley has some backup. Along with her sister, Hattie, Riley meets Dahl, a heaven-born boy with shockingly white hair and a fondness for toilets who might not be telling the whole truth about who he is. Together they’ll fight vicious monsters, discover dark underwater worlds, and race to save the land of the dead from a fate that no one could have foreseen.

And this time, Riley won’t let anything get in her way. Because she can’t shake the feeling that something terrible is coming their way – and the gifted community is going to need all the powers they can get.

Endorsed by Rick Riordan, author of the Percy Jackson and the Olympians, soon to be a series on Disney+.

Complete your middle grade collection with these best-selling fan favorites:
Graci Kim is the national best-selling author of The Last Fallen Star, the first book in the Gifted Clans trilogy. A Korean-Kiwi diplomat turned author, Graci writes about the magic she wants to see in the world. In a previous life she used to be a cooking show host, and she once ran a business that turned children's drawings into cuddly toys. When she's not lost in her imagination, you'll find Graci drinking flat whites, eating ramyeon, and most likely hugging a dog (or ideally, many). She lives in New Zealand with her husband and daughter. Find her at www.gracikim.com and follow her on Twitter @gracikim and Instagram @gracikimwrites.
"With dry humor and rough-and-tumble theatrics, Riley’s story continues as she grapples with guilt, belonging, and her own identity and self-confidence. The novel deftly balances the fun and the serious. The stakes are high, though Riley simply wants to do the right thing for her family and her community. A nonstop, Korean-inspired fantasy adventure that also tackles darker emotions."——Kirkus Reviews

*"Folklore enthusiasts will rejoice at the return to monster-filled lands and new whimsical worlds where anything can happen, and Riley’s signature fun attitude and relatable voice will captivate readers who are just meeting her here, as she continues to search for a sense of belonging in a world that constantly challenges her identity."——Booklist (starred review)