Lewis and Clark Through Indian Eyes: Nine Indian Writers on the Legacy of the Expedition (Paperback) 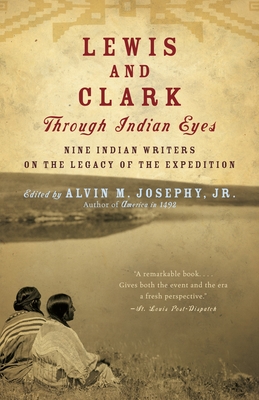 Lewis and Clark Through Indian Eyes: Nine Indian Writers on the Legacy of the Expedition (Paperback)

At the heart of this landmark collection of essays rests a single question: What impact, good or bad, immediate or long-range, did Lewis and Clark’s journey have on the Indians whose homelands they traversed? The nine writers in this volume each provide their own unique answers; from Pulitzer prize-winner N. Scott Momaday, who offers a haunting essay evoking the voices of the past; to Debra Magpie Earling’s illumination of her ancestral family, their survival, and the magic they use to this day; to Mark N. Trahant’s attempt to trace his own blood back to Clark himself; and Roberta Conner’s comparisons of the explorer’s journals with the accounts of the expedition passed down to her. Incisive and compelling, these essays shed new light on our understanding of this landmark journey into the American West.

Alvin M. Josephy, Jr., a leading historian of the American West, was the author of many award-winning books, including The Patriot Chiefs, The Indian Heritage of America, Now That the Buffalo's Gone, The Civil War in the American West, 500 Nations, and A Walk Toward Oregon. He was a vice president and editor of American Heritage magazine, the founding chairman of the board of trustees of the Smithsonian's National Museum of the American Indian, and president of the Western History Association. Josephy died in the fall of 2005, shortly after completing this book.

“A remarkable book…gives both the event and the era a fresh perspective.” —The St. Louis Post-Dispatch “Every story has two sides, and until now, the Indian point of view has scarcely been heard.” —San Francisco Chronicle“[A] compulsively readable book…should be required reading for all Americans.” —Santa Cruz Sentinel