In Spite of the Gods: The Rise of Modern India (Paperback) 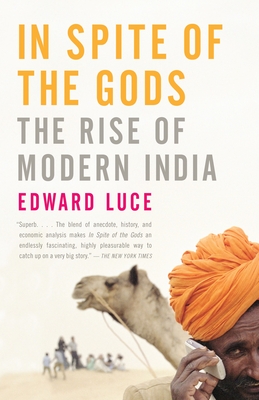 As the world's largest democracy and a rising international economic power, India has long been heralded for its great strides in technology and trade. Yet it is also plagued by poverty, illiteracy, unemployment, and a vast array of other social and economic issues. Here, noted journalist and former Financial Times South Asia bureau chief Edward Luce travels throughout India's many regions, cultures, and religious circles, investigating its fragile balance between tradition and modernity. From meetings with key political figures to fascinating encounters with religious pundits, economic gurus, and village laborers, In Spite of the Gods is a fascinating blend of analysis and reportage that comprehensively depicts the nuances of India's complex situation and its place in the world.

Edward Luce is the Washington commentator for the Financial Times and was previously the paper's South Asia bureau chief, based in New Delhi. He worked for two years as a speechwriter for former Treasury Secretary Laurence Summers. He studied Politics, Philosophy, and Economics at Oxford.

“Superb. . . . The blend of anecdote, history, and economic analysis makes In Spite of the Gods an endlessly fascinating, highly pleasurable way to catch up on a very big story.”
—William Grimes, The New York Times

“[Luce's] research is formidable. . . . [In Spite of the Gods] is stunning in its breadth.” —The New Yorker

“Indispensable. . . . [Luce] is a keen observer.”
—The Wall Street Journal