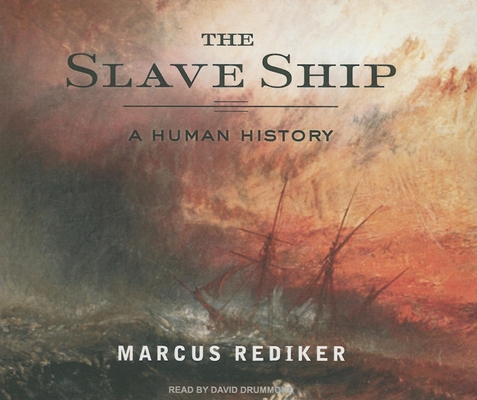 By Marcus Rediker, David Drummond (Narrated by)
$39.99
Email or call for price

For more than three centuries, slave ships carried millions of people from the coasts of Africa across the Atlantic to the New World. Much is known of the slave trade and the American plantation complex, but little of the ships that made it all possible. In The Slave Ship, award-winning historian Marcus Rediker draws on thirty years of research in maritime archives to create an unprecedented history of these vessels and the human drama acted out on their rolling decks. He reconstructs in chilling detail the lives, deaths, and terrors of captains, sailors, and the enslaved aboard a "floating dungeon" trailed by sharks. From the young African kidnapped from his village and sold to the slavers by a neighboring tribe, to the would-be priest who takes a job as a sailor on a slave ship only to be horrified by the evil he sees, to the captain who relishes having "a hell of my own," Rediker illuminates the lives of people who were thought to have left no trace. This is a tale of tragedy and terror, but also an epic of resilience, survival, and the creation of something entirely new, something that could only be called African American. Rediker restores the slave ship to its rightful place alongside the plantation as a formative institution of slavery, as a place where a profound and still haunting history of race, class, and modern capitalism was made.

Marcus Rediker is a professor of history at the University of Pittsburgh.

David Drummond has made his living as an actor for over twenty-five years, and he received an "AudioFile" Earphones Award for his first audiobook, "Love 'Em or Lose 'Em."