House of El Book One: The Shadow Threat (Paperback) 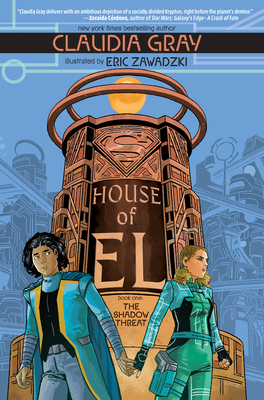 House of El Book One: The Shadow Threat (Paperback)


Currently Unavailable
Welcome to a brand-new vision of one of comics’ most famous tragedies, from New York Times bestselling author Claudia Gray and illustrator Eric Zawadzki. In this first graphic novel in a trilogy, explore Krypton like never before: through the eyes of two young people on opposite sides of the same extinction-level event.

But groundquakes are shaking the planet’s surface. Rebellious uprisings are shaking the populace. Krypton’s top scientists—Jor-El and Lara—conduct a secret experiment that is meant to reform their planet from the cellular level up. Zahn and Sera must join forces to investigate the hidden dangers truly threatening Krypton. In the process, they form a bond that will endure past the end of the world...

Claudia Gray is the New York Times bestselling author of many science fiction and paranormal fantasy books for young adults, including the Defy the Stars series, the Firebird series, the Evernight series, the Spellcaster series, and Fateful. She's also had a chance to work in a galaxy far, far away as the author of the Star Wars novels Lost Stars, Bloodline, and Leia, Princess of Alderaan. Born a fangirl, she loves obsessing over geeky movies and TV shows, as well as reading and occasionally writing fan fiction; however, she periodically leaves the house to go kayaking, do a little hiking, or travel the world. She will take your Jane Austen trivia challenge any day, anytime. Currently she lives in New Orleans.

Eric Zawadzki grew up in Vancouver, but he's recently relocated to Calgary. He's most well-known for the critically aclaimed THE DREGS and ETERNAL. His most recent work in comics is HEART ATTACK, for Image/Skybound comics, which he co-created and illustrated.