The Mystery of the Sorrowful Maiden (A Laetitia Rodd Mystery) (Hardcover) 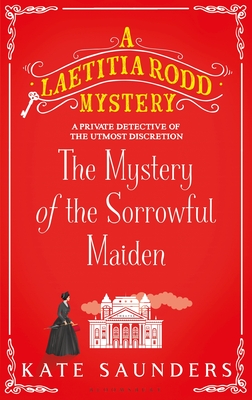 The Mystery of the Sorrowful Maiden (A Laetitia Rodd Mystery) (Hardcover)

In the spring of 1853, private detective Laetitia Rodd receives a delicate request from a retired actor, whose days on the stage were ended by a theater fire ten years before. His great friend, and the man he rescued from the fire, Thomas Transome, has decided to leave his wife, who now needs assistance in securing a worthy settlement. Though Mrs. Rodd is reluctant to get involved with the scandalous world of the theater, she cannot turn away the woman in need. She agrees to take the case.

But what starts out as a simple matter of negotiation becomes complicated when a body is discovered in the burnt husk of the old theater. Soon Mrs. Rodd finds herself embroiled in family politics, rivalries that put the Capulets and Montagues to shame, and betrayals on a Shakespearean scale. Mrs. Rodd will need all her investigatory powers, not to mention her famous discretion, to solve the case before tragedy strikes once more.

For readers of the Grantchester Mysteries, The Mystery of the Sorrowful Maiden is the charming third mystery in Kate Saunders' series about Laetitia Rodd, the indomitable lady detective.

KATE SAUNDERS is a journalist whose work has appeared in The Independent, The Guardian and The Washington Post. She is a founder of the Legal Research Group and was active in the campaign for Harry Wu's release.

“The respectable Mrs. Rodd must rise above her natural qualms about keeping low company by investigating a case involving that near-final rung of Victorian society--actors . . . the real appeal here comes with the details Saunders supplies about gaslit Victorian theaters and a family that plays Romeo and Juliet both on and offstage.” —Booklist

"This is a perfect addition to the Laetitia Rodd series … I highly recommend this book, and if you have not read any of this series before, now is a great time to start. These mysteries are perfect for reading while sitting by the fire with a cup of tea." - Portland Book Review

“Totally beguiling read.” —Booklist, Starred Review on LAETITIA RODD AND THE CASE OF THE WANDERING SCHOLAR

“Thanks to the author's skill, the plot is tight, the scenario plausible, and the narrative tidy and intelligent, conveyed with a wry undertone throughout.” —The New York Journal of Book on LAETITIA RODD AND THE CASE OF THE WANDERING SCHOLAR

“Charmingly written, combining nods to manners of the time with a bit of modern sass.” —Kirkus Reviews on LAETITIA RODD AND THE CASE OF THE WANDERING SCHOLAR