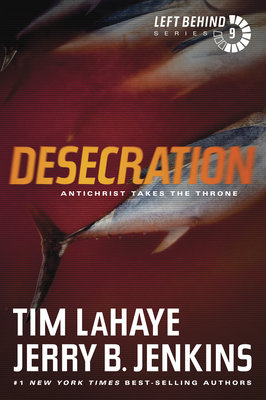 By Tim LaHaye, Jerry B. Jenkins

This is book number 9 in the Left Behind series.

Read the books that launched a cultural phenomenon

"This is the most successful Christian fiction series ever."
--Publishers Weekly

"Call it what you like, the Left Behind series . . . now has a label its creators could have never predicted: blockbuster success."
--Entertainment

Are you ready for the moment of truth?And that's just the beginning . . .
of the end of the world.

The 12 books in the series by New York Times best-selling authors Tim LaHaye and Jerry B. Jenkins cover the events of biblical prophecy surrounding the rapture and the seven-year period known as the tribulation that follows.

Desecration: Antichrist Takes the Throne
His Excellency Global Community Potentate Nicolae Carpathia, no longer pretending to be a pacifist, has ordered every Morale Monitor armed as he prepares to travel along the Via Dolorosa and then onward to the temple, where shocking surprises await.

The lines are drawn between good and evil as God inflicts sores upon the flesh of those who have taken the mark. Meanwhile His chosen ones flee to Petra, where they watch anxiously as GC fighter planes appear overhead and bombs begin to fall.