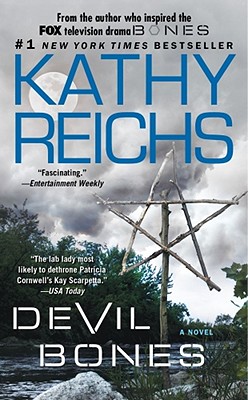 This is book number 11 in the A Temperance Brennan Novel series.

In a house under renovation in Charlotte, North Carolina, a plumber discovers a forgotten cellar, and some rather grisly remains—the severed head of a teenage girl, several decapitated chickens, and a couple of cauldrons containing beads, feathers, bones, and other relics of religious ceremonies. In a river not far away, an adolescent boy’s torso carved with a pentagram, is found. Are these crimes the work of Satanists and devil worshippers?

Nothing is clear, neither when the deaths occurred, nor where. Was the skull brought to the cellar or was the girl murdered there? As Temperance Brennan is called in to investigate, citizen vigilantes intent on a witch hunt are led by a preacher turned politician, looking for revenge.

"Loved it! I'm amazed by how seamlessly Reichs makes the transition from forensic jargon to snappy, funny dialogue -- scientist to great storyteller. What's not to admire and envy?" -- Sandra Brown, author of Play Dirty

"Reichs is a standout...[with] a formidable way of incorporating science with character and plot.... Her expertise is snappily and entertainingly delivered." -- Booklist

"Reichs keeps the roller coaster on track and speeding along, page after page." -- Jeffery Deaver

"Her expertise is snappily and entertainingly delivered." -- Booklist