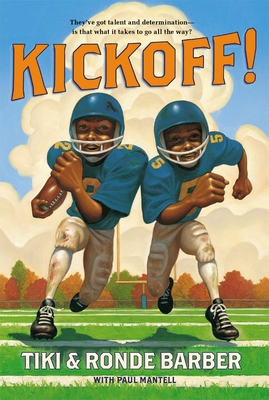 
Ships to Our Store in 1-5 Days
Inspired by the childhood of NFL superstars Tiki and Ronde Barber, this middle grade novel is a story of teamwork, perseverance, and what it takes to be a champion.

Tiki and Ronde’s twelfth summer is winding down—the nights are getting shorter and the evenings cooler. That means two things: The first day of junior high is just a few days away, and it’s almost the start of football season at last. With two championships and an 8-2 season last year, Tiki and Ronde are ready to graduate from the Peewee League and hit the field as starting players for the Hidden Valley Eagles.

But junior high is a lot bigger than elementary school. The competition for starting spots is stiff, and seniority rules. If Tiki and Ronde make it past tryouts and cuts, will they get the chance to play, or will they have to spend the season watching from the bench with the other seventh graders?
Tiki Barber is a record-holding retired running back for the New York Giants. He married and is the father of four children.

Ronde Barber is a record-holding cornerback who retired after fifteen seasons with the Tampa Bay Buccaneers. He is one of only two cornerbacks selected to the Pro Bowl five times. He is married with two daughters.

Paul Mantell is the author of more than 100 books for young readers, including books in the Hardy Boys and Matt Christopher series.