This Is Our City: Four Teams, Twelve Championships, and How Boston Became the Most Dominant Sports City in the World (Hardcover) 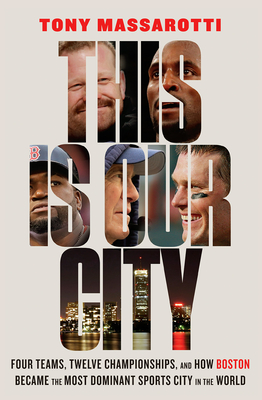 This Is Our City: Four Teams, Twelve Championships, and How Boston Became the Most Dominant Sports City in the World (Hardcover)

Boston is a unique sports city. Unlike New York, Los Angeles, or Chicago, New Englanders' loyalties are not divided among competing franchises; in the four major American sports, the city has one team each: the Red Sox, the Celtics, the Bruins, and the Patriots.

And, as any Boston fan will tell you, that loyalty runs deep. Sports just seem to mean more in New England. Over the last 20 years, those fans have been blessed with an extraordinary run of success, including 12 championships, six runners-up, and many more years of heated contention. In the 21st century, Boston became Titletown.

According to Tony Massarotti, longtime Boston sports columnist and host of the #1 sports radio show in New England for the past ten years, this is not a coincidence. Massarotti's This Is Our City paints a portrait of the last 20 years in Boston sports, showing how one team's success has led to the next—how they have fed off each other, tried to one-up one another, and have supported each other. This is an account of an era where successes and failures stitched together the region, all playing out against major events such as 9/11 and the devastating Boston Marathon—which led to a memorably profane speech by David Ortiz, who declared, "This is our f@#king city!" Massarotti's This Is Our City is a valentine to Boston sports and will be loved by those fans, wherever they now live.
As the co-host of Felger & Mazz, the #1 sports radio show in New England with millions of listeners, Boston-based Tony Massarotti has direct dialogue with fans and potential book buyers five hours a day, five days a week. He is enormously well-connected and a huge draw for fans. And he can write. He is, of course, well-known nationally having been a go-to person on the Red Sox during their run during this time.
“Boston sports fans have been America’s luckiest in the new millennium. There have been twelve championships to savor in the first twenty-one years of the twenty-first century, including one dazzling run of seven years in which the Patriots, Red Sox, Celtics, and Bruins each won a title. And now Tony Massarotti gives them a chance to relive it all in This Is Our City, which refers to, of course, the famous David Ortiz declaration in the wake of the 2013 Marathon bombings. Tony has done the work, and we get to enjoy the fruits of his phenomenal labor. For those of us who have lived through it all, this is our story, too. Thanks, Tony.”—Bob Ryan

“If anybody is qualified to riff about Boston sports in the last twenty years, it’s Tony Massarotti, and boy has he got plenty to riff about! Championships all over the place and the envy of every major sports city in the country. This wonderful book will bring back all those great memories. The B’s, Pats, Celts, Sox, and Massarotti! What’s better than that?”—Chris “Mad Dog” Russo

“I played in Boston, I was an executive in Boston, and there’s no place like it. Someone needed to tell the story of the city and its incredible run over the past few decades, and I’m so glad Tony Massarotti did it. This Is Our City isan entertaining and astute account by a guy who saw it all.” —Danny Ainge

"This blend of memoir and history, written from a fan’s perspective, is a love letter to the city of Boston and the four major sports teams that call it home. In a meticulously researched of the Beantown teams that dominated their respective sports in the early twenty-first century, Boston sportswriter and radio talk-show host Massarotti details how these franchises, at one point mired in mediocrity, managed to rise to championship level. Much of the book focuses on the Patriots and the Red Sox, but the Celtics and Bruins also get their fair share of analysis and breakdown. It would be easy for Massarotti to skip over the ugliness that has occasionally hung like a dark cloud over the city and its teams, but he isn’t afraid to tell it like it is, even when discussing the city’s reputation for racism. Casual sports fans will remember some of the teams celebrated here, but this book is best for Boston diehards, who can be found across the country."—Booklist

“While some of these moments will never leave the consciousness of a true Boston sports fan—‘The Steal,’ ‘Anything Is Possible,’ Malcolm Butler’s interception, to name a few—there are plenty more that readers will be thrilled to re-live here in these pages.”—Boston.com