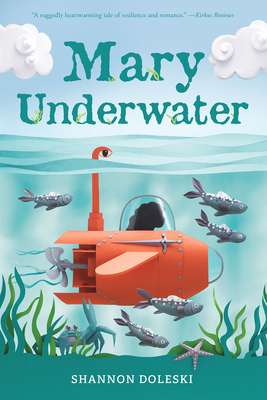 
Available at One of Our Locations
Now in paperback, inspired by Joan of Arc, a girl builds a submarine and pilots it across the Chesapeake Bay to escape her abusive father in this gorgeous middle-grade debut

Mary Murphy feels like she’s drowning. Her violent father is home from prison, and the social worker is suspicious of her new bruises. An aunt she’s never met keeps calling. And if she can’t get a good grade on her science project, she’ll fail her favorite class.

But Mary doesn’t want to be a victim anymore. She has a plan: build a real submarine, like the model she’s been making with Kip Dwyer, the secretly sweet class clown. Gaining courage from her heroine, Joan of Arc, Mary vows to pilot a sub across the Chesapeake Bay, risking her life in a modern crusade to save herself.

Mary Underwater is an empowering tale of persistence, heroism, and hope from a luminous new voice in middle-grade fiction.
Shannon Doleski is the author of Mary Underwater, which received a starred review from Bulletin of the Center for Children’s Books, who called it “perfect for readers not quite ready for Laurie Halse Anderson.” She was born and raised in Cazenovia, New York. After graduating from Niagara University with an English education degree, Shannon was an English teacher and swim coach in New York and Maryland. She lives with her family in West Texas. Visit her author website at shannondoleski.com.
"A heartwarming story about submarines, first love, and asking for help when you need it the most. Readers will be rooting for Mary as they learn about submersible science and Joan of Arc."
— School Library Connection

**STARRED REVIEW**
"This is perfect for readers not quite ready for Laurie Halse Anderson and anyone who needs a reminder that there’s always hope."
— Bulletin of the Center for Children's Books

"Doleski’s debut features a protagonist who morphs from reticence to courage to overcome adversity as she learns the importance of both self-reliance and accepting support from friends. . . offers a realistic, engaging portrayal of adolescents dealing with parental violence."
— Booklist

"A ruggedly heartwarming tale of resilience and romance."
— Kirkus Reviews