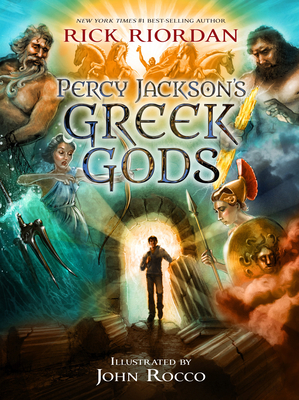 
Ships to Our Store in 1-5 Days
Who could tell the origin stories of the gods of Olympus better than a modern-day demigod? Percy Jackson provides an insider's view with plenty of 'tude in this illustrated collection.
A publisher in New York asked me to write down what I know about the Greek gods, and I was like, Can we do this anonymously? Because I don't need the Olympians mad at me again. But if it helps you to know your Greek gods, and survive an encounter with them if they ever show up in your face, then I guess writing all this down will be my good deed for the week.

So begins Percy Jackson's Greek Gods, in which the son of Poseidon adds his own magic--and sarcastic asides--to the classics. He explains how the world was created, then gives readers his personal take on a who's who of ancients, from Apollo to Zeus. Percy does not hold back. "If you like horror shows, blood baths, lying, stealing, backstabbing, and cannibalism, then read on, because it definitely was a Golden Age for all that."

John Rocco (www.roccoart.com) studied illustration at Rhode Island School of Design and The School of Visual Arts. In addition to writing and illustrating four of his own picture books, including the Caldecott Honor-winning and New York Times bestselling Blackout, he has created all of the cover art for Rick Riordan's best-selling Percy Jackson, Kane Chronicles, and Heroes of Olympus series. He has also illustrated books by Whoopi Goldberg and Katherine Patterson. Before becoming a full-time children's book creator, he worked as an art director on "Shrek" for Dreamworks, and for Disney Imagineering. He lives in Los Angeles.
"The clash of modern and classical worlds is both exciting and entertaining."—-<EM>The New York Times Book Review</EM>

Praise for The Last Olympian:"Riordan masterfully orchestrates the huge cast of characters and manages a coherent, powerful tale at once exciting, philosophical and tear-jerking. The bestselling series's legions of fans will cheer their heroes on and rejoice in such a compelling conclusion to the saga."—-<em>Kirkus Reviews</em> (starred review)