Little Naturalists: Ansel Adams and His Camera (Board Books) 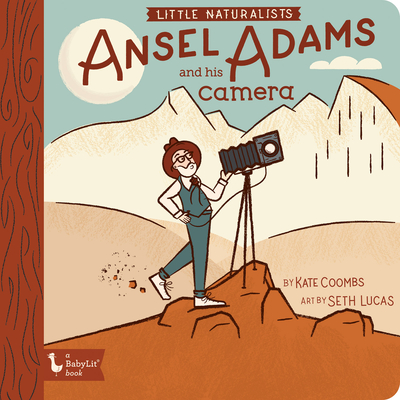 Little Naturalists: Ansel Adams and His Camera (Board Books)

Ansel Adams was twelve years old when he received his first camera on a trip to Yosemite National Park. He spent the rest of his life taking photographs and advocating for conservation. Kate Coombs' engaging story and Carme Lemniscates' beautiful art bring Adams to life for young readers, encouraging little naturalists to Be Adventurous and Be Creative.

Kate Coombs is an award-winning author of original fairy tales, poems, middle-grade fantasy novels, and picture books, including the critically acclaimed Water Sings Blue, which won the Lee Bennett Hopkins Poetry Award for 2012, and seven books in the bestselling BabyLit series. She lives in Bountiful, Utah.Seth Lucas is an illustrator and designer with a BFA in graphic design. He is the co-creator of Ello There Outdoors selling prints and accessories supporting the National Parks and outdoors. He lives in Indianapolis, Indiana, with his wife and daughter.