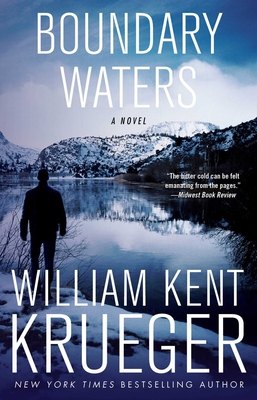 The Quetico-Superior Wilderness: more than two million acres of forest, white-water rapids, and uncharted islands on the Canadian/American border. Somewhere in the heart of this unforgiving territory, a young woman named Shiloh—a country-western singer at the height of her fame—has disappeared.

Her father arrives in Aurora, Minnesota, to hire Cork O’Connor to find his daughter. Cork joins a search party that includes an ex-con, two FBI agents, and a ten-year-old boy. Others are on Shiloh’s trail as well—men hired not just to find her, but to kill her.

As the expedition ventures deeper into the wilderness, strangers descend on Aurora, threatening to spill blood on the town’s snowy streets. Meanwhile, out on the Boundary Waters, winter falls hard. Cork’s team of searchers loses contact with civilization, and like the brutal winds of a Minnesota blizzard, death—violent and sudden—stalks them.
William Kent Krueger is the New York Times bestselling author of This Tender Land, Ordinary Grace (winner of the Edgar Award for best novel), as well as nineteen acclaimed books in the Cork O’Connor mystery series, including Lightning Strike and Desolation Mountain. He lives in the Twin Cities with his family. Learn more at WilliamKentKrueger.com.
"Krueger's writing, strong and bold yet with the mature mark of restraint, pulls this exciting search-and-rescue mission through with a hard yank."
— Publishers Weekly

“Krueger’s… a writer to watch. He has characters with depth, a style that combines realism with resonance, a great eye for setting, and he can churn out a fine plot.”
— Toronto Globe & Mail

"The bitter cold can be felt emanating from the pages."
— Midwest Book Review