Claw the System: Poems from the Cat Uprising (Hardcover) 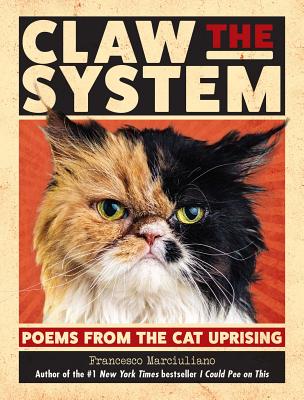 Claw the System: Poems from the Cat Uprising (Hardcover)


Ships to Our Store in 1-5 Days
From the #1 New York Times bestselling author of I Could Pee on This, Francesco Marciuliano, comes a lesson from cats in resistance.

Cats are done with humans' crap. For too long they have put up with baby talk, the humiliation of holiday costumes, and the social injustice of being told, "No." They will not sleep through this anymore. We humans have woken the beast, and in this book they have gathered together to reclaim their voice, loudly and repeatedly until we pay attention. Watch the uprising unfold, through anthems such as "Redefine Terms," "Accepted," "Decide," "A New Dawn," and "Just What Do You Think You're Doing?" Show support for your feline friends and try to understand why they're so spitting mad.
Francesco Marciuliano is the author of the #1 New York Times bestselling book I Could Pee on This and Other Poems by Cats as well as the bestselling titles I Could Chew on This, I Knead My Mommy, You Need More Sleep, and I Could Pee on This, Too. He writes the internationally-syndicated daily comic strips Sally Forth and Judge Parker in addition to his webcomic Medium Large. He was also the Head Writer for the twice Emmy Award-winning children’s show SeeMore’s Playhouse and has written for the Onion News Network, Smosh, and McSweeney’s as well penned/typed/scrawled the play This Isn’t Working for the New York International Fringe Festival.

Francesco has appeared in/on Huffington Post, All Things Considered, Sirius XM, Buzzfeed, The New York Times, Washington Post, Los Angeles Times, Mental Floss, and The A.V. Club. On some of these he has expressed his concern that he will not be able to acquire a jetpack before age 100, at which point he will only be able fly it into a wall or unyielding duck.

Francesco Marciuliano is available for viewing Monday-Saturday, 9AM to 5PM (closed on Sundays and holidays). Please inquire about group-rate discounts as well as the audio tour guide inside his head. He lives in New York City with his two cats Kiki and Leelo and eventually a dog, tea cup pig, and pygmy goat, unless the co-op board says otherwise or checks.