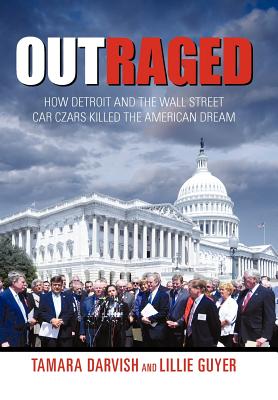 
Ships to Our Store in 1-5 Days
(This book cannot be returned)
In Outraged, an auto insider provides an inspiring account of what it means to lose your rights, property, and, in essence, the American dream. It begins with roughly two thousand men and women whose companies were destroyed by two automakers, General Motors and Chrysler, during their government-led corporate restructurings in 2009. Authors Tamara Darvish, vice president of DARCARS Automotive in Maryland, and Lillie Guyer, a Detroit area automotive journalist, show the collapse of the American dream from the perspective of an entrepreneur who was affected by the automotive industry bailout. In this featurized business story, Outraged details the founding of the activist group Committee to Restore Dealer Rights and its efforts to regain the economic rights of auto dealerships throughout the United States. It tells how they took their fight to Congress and to the steps of the White House. Outraged candidly examines the battles between dealers and the entities that engineered their demise. It also details the pain and the high points in government as its temporary power brokers ignore the significant role of Congress in lawmaking and the rights of ordinary citizens. This personal, controversial account shows what can happen when people unite in a common cause and stand up for what they believe is right.