No Place Left to Bury the Dead: Denial, Despair and Hope in the African AIDS Pande (Paperback) 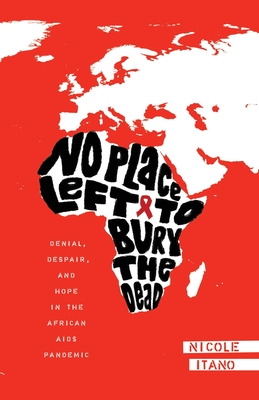 No Place Left to Bury the Dead: Denial, Despair and Hope in the African AIDS Pande (Paperback)


Ships to Our Store in 1-5 Days
EVERY DAY in Africa, approximately 7,000 men, women, and children are erased from the face of this planet by the devastating AIDS virus that -- even after more than two and a half decades -- continues to wreak havoc around the globe, especially in underdeveloped nations. No Place Left to Bury the Dead dares to go where media, governments, and ordinary individuals in the West seldom venture -- face-to-face with fellow humans suffering in the shadow of our collective ignorance and neglect.

In this haunting investigation, acclaimed journalist Nicole Itano goes beyond traditional journalistic methods as she eats, sleeps, and lives with the women who struggle daily with the raging epidemic of AIDS. Working from the personal accounts of a few real women living with the disease, Itano traces their moments of discovery and diagnosis, their first symptoms, and the ways they cope with treatment and manage the news with their families. Itano's masterful blend of the personal, scientific, and historical turns statistics into stories and balances tragedy with hope as she outlines the scope of new treatment and prevention.

In a time when celebrity and political heavy hitters such as Bono and Bill Clinton are rushing to find a remedy for Africa's increasing problem, No Place Left to Bury the Dead shows the world how the transformation of a few courageous women can heal entire communities and eradicate denial, and how books like these increase global awareness of one of the worst epidemics in human history. Like And the Band Played On and The Coming Plague, this book is a wake-up call that is urgently needed.
NICOLE ITANO has reported for numerous newspapers and magazines, including The New York Times, The Christian Science Monitor, and Elle. She spent more than five years living in and reporting from Africa. She now lives in Athens, Greece.