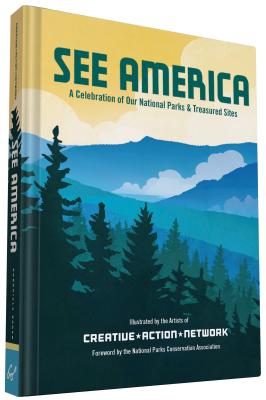 To coincide with the 2016 centennial anniversary of the National Parks Service, the Creative Action Network has partnered with the National Parks Conservation Association to revive and reimagine the legacy of WPA travel posters. Artists from all over the world have participated in the creation of this new, crowdsourced collection of See America posters for a modern era. Featuring artwork for 75 national parks and monuments across all 50 states, this engaging keepsake volume celebrates the full range of our nation's landmarks and treasured wilderness.

Creative Action Network is a marketplace for original, visual, meaningful artwork that harnesses creative talents for good through crowdsourced campaigns.

National Parks Conservation Association is the leading voice of the American people in the fight to safeguard our National Park System.

"A new book is adding to the mix, reinventing what helped bring our national parks to vivid, rugged life in the 1930s and onward: the iconic parks poster. 'See America' from Chronicle Books is a colorful homage from artists to the country's 75 national parks and sites."
-Minneapolis Star Tribune—-

"Need one more reason to get outside? Pick up See America...The book celebrates the 100th anniversary of the National Park Service and is filled with inspiring illustrations of 75 parks you'll ant to visit."
-Martha Stewart Living—-

Father's Day Gift Pick "If Dad is an avid traveler or just has a serious case of wanderlust, he'll love thumbing through the various graphic posters illustrating a beautiful park or national monument"
-Real Simple—-