You Must Bring a Hat! (Hardcover) 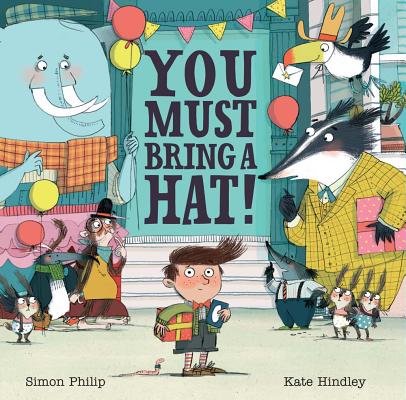 You Must Bring a Hat! (Hardcover)


Currently Unavailable
"You are cordially invited to the BIGGEST, BESTEST, HATTIEST party of all time "
Come join the fun--but only if you have a hat. AND you know the entry rules. Unfortunately, there seems to be a surprising number of those, as a young boy discovers. Will he--and the cool collection of animals he befriends along the way--ever get in? Gloriously illustrated, the art contains loads of details that serve as clues to the satisfying surprise ending. Kids will read this thoroughly hilarious cumulative picture book again and again "Mounting exasperation, preposterous rules, and just plain fun make this party a surefire hit. (Picture book. 3-8)" --Kirkus Reviews (starred review)
Simon Philip was born in Chichester and has lived there ever since. After gaining a first-class degree in History at Exeter University, he immediately put his skills to good use working as a barman at a local pub. He soon grew tired of the owner calling him Andy, and so, naturally, decided to become a primary school teacher. Teaching rekindled his love of children's literature, particularly picture books, so much so that he had a go at writing his own. Kate Hindley is a children's book illustrator living and working in Birmingham, UK. She worked as a Print Designer at a Northamptonshire-based design company before she got her first book deal with Simon & Schuster back in 2011, illustrating Claire Freedman's The Great Snortle Hunt. Since then she has worked on picture books and fiction with publishers including Walker Books, Simon & Schuster, Bloomsbury, Candlewick, and Usborne.