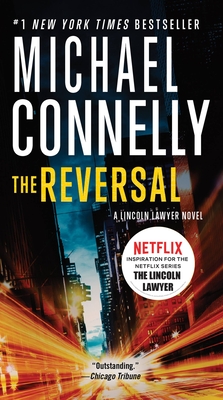 This is book number 3 in the A Lincoln Lawyer Novel series.

The stakes have never been higher: when DNA evidence frees a sadistic killer, defense attorney Mickey Haller and LAPD Detective Harry Bosch must put him behind bars before he strikes again.   Longtime defense attorney Mickey Haller is recruited to change stripes and prosecute the high-profile retrial of a brutal child murder. After twenty-four years in prison, convicted killer Jason Jessup has been exonerated by new DNA evidence. Haller is convinced Jessup is guilty, and he takes the case on the condition that he gets to choose his investigator, LAPD Detective Harry Bosch.

Together, Bosch and Haller set off on a case fraught with political and personal danger. Opposing them is Jessup, now out on bail, a defense attorney who excels at manipulating the media, and a runaway eyewitness reluctant to testify after so many years.

With the odds and the evidence against them, Bosch and Haller must nail a sadistic killer once and for all. If Bosch is sure of anything, it is that Jason Jessup plans to kill again.
Michael Connelly is the author of twenty-seven previous novels, including the #1 New York Times bestsellers The Burning Room and The Gods of Guilt. His books, which include the Harry Bosch series and Lincoln Lawyer series, have sold more than sixty million copies worldwide. Connelly is a former newspaper reporter who has won numerous awards for his journalism and his novels and is the executive producer of Bosch, starring Titus Welliver. He spends his time in California and Florida.
"Connelly is firing on all cylinders in this epic page-turner. The intriguing story line, the chance to view Bosch from another perspective, and Haller's reappearance as a main character add up to a fantastic read. One of the best thrillers of the year."—Jeff Ayers, Library Journal

"The answer to every Connelly fan's dream: Hieronymus Bosch meets the Lincoln Lawyer....By turns wary, competitive, complementary, cooperative and mutually predatory....Connelly brings his two sleuths together in a way that honors them both"—Kirkus Reviews

"If at first encounter Connelly seems primarily an exceptionally accomplished writer of crime novels, at closer examination he is also a mordant and knowing chronicler of the world in which crime takes place, i.e., our world....Aterrific ride."—Jonathan Yardley, Washington Post

"A beautifully executed crime thriller....Bosch might have met his match in the wily Haller, and readers will delight in their sparring."—Publishers Weekly