Peter Duck: A Treasure Hunt in the Caribbees (Swallows and Amazons #3) (Compact Disc) 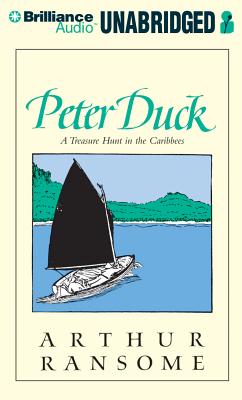 Peter Duck: A Treasure Hunt in the Caribbees (Swallows and Amazons #3) (Compact Disc)

This is book number 3 in the Swallows and Amazons series.

The third book in Arthur Ransome's wonderful series for children, Peter Duck takes intrepid explorers John, Susan, Titty, and Roger Walker and fearless Amazon pirates Nancy and Peggy Blackett onto the high seas. Under the command of the infamous Captain Flint (Nancy and Peggy's Uncle Jim), the children brave a real-life pirate and his cutthroat crew, fog, sharks, and the ravenous crabs of Crab Island in search of buried treasure. "In many ways, Peter Duck is the best of the series." -The Guardian "This is the stuff of real imagination which might so easily happen ... all the details are true to life, the ship is a real ship, with all its sails and rigging made familiar, and the voyage which those happy children make to southern seas and coral islands is the beautiful possibility of daring and freedom become living and credible." -Listener.