Driven to Succeed: How Frank Hasenfratz Grew Linamar from Guelph to Global (Hardcover) 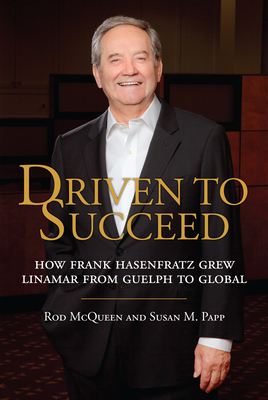 Driven to Succeed: How Frank Hasenfratz Grew Linamar from Guelph to Global (Hardcover)

The story of what one daring entrepreneur with dreams and determination can achieve.

Frank Hasenfratz grew up in Hungary learning to dodge bullets and avoid land mines during the Second World War. When the 1956 revolution erupted, he and his army unit joined the insurgents. After the revolution was crushed, he fled to Guelph, Ontario, where he gambled everything on a one-man operation making oil pumps for Ford. The company he founded, Linamar, today has 15,000 employees in eight countries and is the second-largest maker of auto parts in Canada. To create this global empire, Hasenfratz stayed ahead of competitors through hard work, visionary leadership, a cost-conscious regimen, and a skilled workforce.

In 1990, Hasenfratz designated his daughter, Linda, to succeed him as chief executive officer but first put her through a prolonged apprenticeship that took her from the plant floor to head office. Driven to Succeed is the story of what one daring entrepreneur with dreams and determination can achieve.

Susan M. Papp is a television producer and director and the author of Outcasts. While working at the CBC, she was awarded the Michener Award for outstanding investigative reporting. She teaches at the Munk School of Global Affairs and lives in Toronto.